Get Rid of Excess Fat on Your Arms

Those ever-elusive Aniston arms can actually be yours.

Who hasn’t admired— correction, dreamed of possessing—Jennifer Aniston’s upper arms? Arms that are firm and fat-free. Arms that look as though all those bench dips and triceps extensions you do actually work. Arms that don’t sway in the breeze when you wave—the dreaded “bat wing” effect. Lots of us crave arms like that.That may be why brachioplasty— the medical term for an upper arm lift—has soared in popularity. According to the American Society of Plastic Surgeons, more than 16,000 upper arm lifts were performed in 2014. That’s a 3 percent increase from 2013 and a whopping 4,694 percent increase from the year 2000. 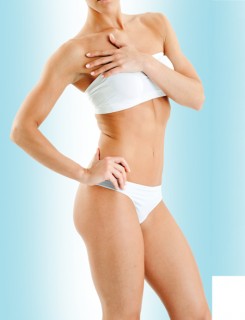 Why the dramatic surge? “More women are becoming aware that we can treat that excess skin on the upper arms,” says Anureet Bajaj, M.D., a plastic surgeon in Oklahoma City and vice-chair of the public education committee of the American Society of Plastic Surgeons.

Any woman will attest that the sleeveless look is perennially “in,”especially when the mercury starts to climb or the time comes to hit the gym floor.

There are several reasons those bat wings occur. First is genetics, which is always going to play a role. Just as some women gain fat in their hips, inner thighs, or tummy, others gain it in their upper arms. And when they lose that excess weight, the stretched-out skin fails to snap back into its proper position. “Some people, no matter what they do, still have bat wings,” says Beverly Hills plastic surgeon Andre Aboolian, M.D.

“I have a 26-year-old patient who has lost more than 100 pounds, but she has loose skin hanging from her arms. The skin’s elasticity is gone.” Of course, aging is another culprit. “As we celebrate those birthdays, we also lose skin elasticity,” Dr. Aboolian adds.

The good news is that it’s never too late to fix the problem with an upper arm lift. “You can’t be too old,’ says Dr. Bajaj. “You can chronologically be 75 yet if you’re healthy, don’t have medical problems such as heart disease and diabetes, and are a non-smoker, you’re a candidate for the procedure.” By the same token, a woman who’s 40 and in questionable health may not be a good candidate, adds Dr. Bajaj.

Before you have a brachioplasty, just keep in mind that weight changes will affect the outcome. You will need to reach your goal weight and maintain it for at least six months. “Otherwise, the results won’t be as good,” says Dr. Bajaj. And don’t expect brachioplasty to confer instant muscle tone. “The only way to get that is through exercise,” says Bajaj. Still intrigued? Here’s what you need to know about the procedure.

A brachioplasty is a contouring procedure that improves the appearance of your upper arms. During the procedure, the surgeon removes fat deposits and then removes and tightens excess skin in the region.But while a brachioplasty can dramatically improve the appearance of your upper arms, it’s not a substitute for healthy eating and regular exercise. “You must have done everything you can to maintain your body weight,” insists Dr. Aboolian. “Surgery should be your last option.”

The first step is to remove excess fat from the upper arms using liposuction. According to Dr. Aboolian,“If there’s fat in the area, tightening the skin is meaningless.” During liposuction, Aboolian makes two tiny incisions, one in the armpit and one by the elbow, and removes extra fat. In the cases of younger patients with decent skin elasticity, Aboolian waits six to 12 months before performing brachioplasty.

“I want to see how much skin retraction there is,” he explains. “If the patient is happy with what she sees at that point, we don’t move forward with skin removal. You have to live with results from plastic surgery to find out not only if you like it but whether or not it fits your lifestyle.” For most patients, the liposuction and brachioplasty are both done on the same day, under IV sedation. (You’ll be asleep.) Following liposuction, which takes about 30 minutes per arm, the skin is tightened. 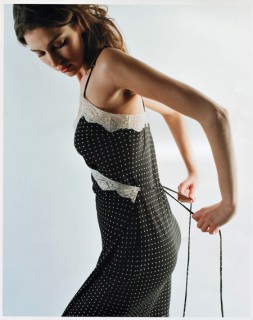 There are three types of brachioplasty. Limited or “mini” brachioplasty, which takes about 90 minutes, is performed on someone who doesn’t have a lot of excess skin. Here, the surgeon makes an incision in the armpit and snips off excess skin. A standard brachioplasty is for people with more skin in the upper arm area. To remove it, the surgeon makes an incision on the underside of the arm, running from the armpit to the elbow area. This version of the arm lift takes about three and a half hours.

During an extended brachioplasty— reserved for people who have excess arm skin as well as extra skin on the outer area of the breast (what is commonly known as “bra bulge”)—the incision runs down the side of the chest wall as well as from the armpit to the elbow. This procedure can last up to five hours.

Non-invasive radiofrequency skin tightening may be an option for people who want to get rid of excess skin without undergoing surgery. It’s recommended for people who have a “minimal amount of excess skin,” says Michael Edwards, M.D., president of the American Society for Aesthetic Plastic Surgery.

During the procedure—which can take up to an hour and is a non-invasive, office-based procedure performed without sedation—the surgeon uses radiofrequency energy to heat the deeper layer of skin.As you heal, changes in collagen, which gives skin its structure, tighten up the skin. “For the best results, you need at least two to three treatments,” says Dr. Edwards.

Any surgery has risks, including uncommon instances associated with aesthesia. With brachioplasty, there’s a slight risk of infection, bleeding, or blood clots, too. Though rare, fluid can temporarily collect in the arms. Many patients develop a numbness in the arms that resolves or improves within six months to a year, notes Dr. Bajaj. The most common risk? Scarring. “There’s no way to perform brachioplasty without scarring,” says Dr. Bajaj. “That’s the compromise.”

It typically takes up to a year for the scars to fade and soften, she adds. However, fractional lasers can improve the appearnce of scars, should they happen to occur. A radiofrequency procedure can cause temporary skin redness, swelling, or numbness. Also, the results may be shortlived, lasting on average one to three years. “We have a ways to go with these procedures,” admits Dr. Aboolian. “The gold standard is still skin removal during surgery.”

Expect some bruising and swelling after brachioplasty. Elevating your arms will decrease swelling. Also, your surgeon may have you wear a compression garment on your arms to ease swelling. You can return to work within five to seven days following a brachioplasty and resume exercising within six to eight weeks, says Dr. Aboolian. Typically, you can resume normal activities immediately following treatment with radiofrequency.

About $3,729 for both arms, according to the American Society of Plastic Surgeons. That doesn’t factor in the cost of liposuction or that of anesthesia. Radiofrequency costs an estimated $1,500.

Seek a board-certified plastic or cosmetic surgeon. Once you’ve found one, discuss your options and learn of his or her past experiences performing brachioplasty, advises Dr. Bajaj. Also, make sure the procedure will be performed in an accredited facility. Dr. Aboolian recommends looking at “before and after” pictures of previous patients. You should also have a frank discussion about scarring risk. How noticeable your scars will be depends upon your skin.

“Some people get a very faint white line and some form thicker scars,” says Dr. Aboolian. He always examines existing scars, “to get a better sense of who is less likely to get thick, ugly scars.” If someone is prone to unsightly scarring, he says: “I will try to talk the patient out of the procedure.” Before you make a final decision, remember: Undergoing an arm lift doesn’t mean you’ll never develop bat wings again. “If you were to have large weight fluctuations, they could return, though hopefully not to the same degree,” says Dr. Bajaj. So it’s important to watch your weight.

6 Worst Foods For Your Skin

Mind and Body Rejuvenation for Any Age

Save Your Summer with These Easy Hacks