We’ve long been in love with the looks of fashion legend Norma Kamali and the baubles of jeweler Ranjana Khan. Here, we sit down with these two  inspiring women to learn the secrets to their success, joy, and creativity.

There are situations that inevitably shake our rafters, be it the extra pounds on a  scale, the red wine spilled on a white blouse, or perhaps something more serious— health news or relationship trouble. “There are days that are going to make you  crazy,” says celebrated designer Norma Kamali. “My goal is to provide you with tools  to empower yourself.” From her Wellness Café in New York City, to her easy-to-wear  sweat apparel, to Youtube.com  interviews with health and lifestyle experts (Abdi  Assadi and Twyla Tharp among them), Kamali is creating a global platform that bolsters women’s self-esteem, integrity, and self-image. “With these tools, a woman will  have the confidence to reach her full potential—which will in turn create a human  being that is more interesting, more exciting, and more generous in spirit.”

As I sit in Kamali’s Manhattan studio listening to this living legend (clad in her own luxurious garb and large, horn-rimmed glasses) share her perspective, I realize I could stand to use some of her mojo. Her energy and vitality belie her 69 years. I’m inspired to learn that she’s shaking up the status quo and embarking on this wellness journey at this stage of life. “It’s overwhelming, but I have an end goal dream: Create a platform of clothing that is easy to take care of and modern, that you can throw in the washing machine and have the kids spit up on, then go to your business meeting—and just live life,” says Kamali.

And it’s not only about clothes. It’s about a lifestyle that embraces the food we eat, making smart choices, and sharing stories across the globe. Within her film studio, Kamali highlights ideas to show clothes in a real way, away from the runway. Experts share with her usable notions of modern health and fitness, not to mention ways to dream big. It’s also about her campaign to stop the objectification of women. Never shy about pushing the envelope, Kamali invites women on her Stopobjectification.com website to share stories about their most powerful body part, and why they feel they can serve as an inspiration to others.

Kamali’s journey is a powerful demonstration of resourcefulness. She credits her Lebanese mother for bolstering her self-reliance. “She implanted in my brain that you can do anything and should not rely on a man for your financial well-being.” After marrying her Iranian husband, Mohammed Kamali, at 19, Kamali—who originally wanted to be a painter—worked as an airline stewardess. While traveling to the far corners of the world, she collected clothes and big ideas. A clothing store followed, and within six months upon opening, Kamali’s designs were spread across the pages of Vogue and Harper’s Bazaar. But at age 29, Kamali found herself at a personal crossroads, divorcing her husband and taking nothing but the $98 she had to her name. 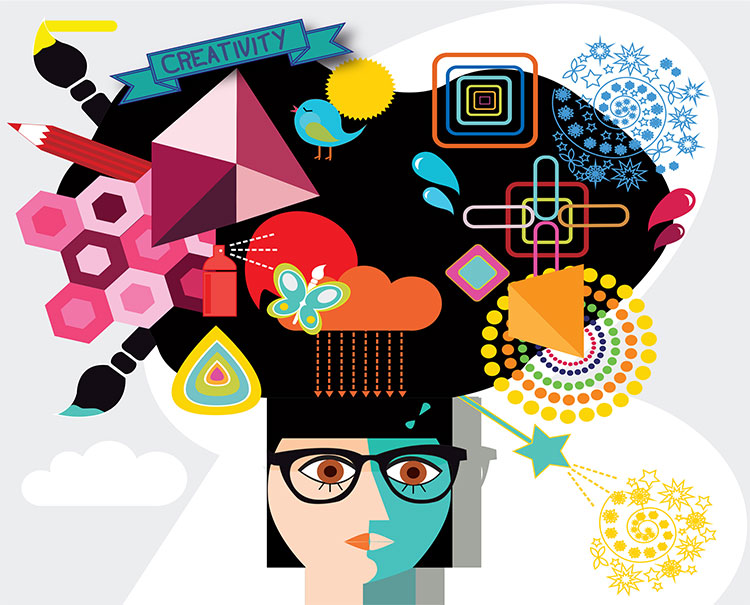 “It was very radical… It was also at a time when there were a lot of drugs and I didn’t do any drugs,” she says of the ill-fitting culture around her. One day, an employee, who she kept firing but was constantly rehired by Kamali’s husband who favored the young, pretty woman, instructed Kamali to design a particular shirt a certain way. “I was sitting at my cutting table. The ceiling suddenly fell over my cutting table. I said to my head sample maker [who is still with Kamali today]: ‘Confucius says that when ceilings fall on your head, it’s time to leave.’ I picked up my things and never went back.”

Since she could not legally use the brand name— her own—she started the On My Own Norma Kamali line, or OMO, and went on to design the one-piece red bathing suit worn by Farrah Fawcett in the iconic 1976 poster. Equally remarkable and award winning in design were her “sleeping bag” coat and garments made from silk parachutes, which are now in MOMA’s permanent collection. Kamali has been credited with popularizing shoulder pads in the 1980s.

With such an impressive pedigree, it’s little wonder that this powerhouse possesses an ever evolving, deeply creative mind. For those engaged in the world of wellness, her endeavors of late have us feeling healthier and more fab than ever.

Every now and then you meet someone who is absolutely invigorating. I’m standing next to Ranjana Khan, celebrated jewelry designer and wife of fashion designer Naeem Khan, staring at the giant graffiti shark painting hanging over her bed in New York City. She’s talking about the night she discovered the painting’s creator while driving around downtown Miami. “His name is Shark Toof, like a lisp, and he does mostly sharks,” Khan says excitedly. “I’m working with all these graffiti artists. I’m going to take these canvases to India and embellish their art, then bring them back to exhibit in our show this year.”

Her energy appears unstoppable as she explains her new venture: “haute couture meets the street.” Khan supplies each graffiti artist with large canvases and contracts them to create pieces. In India, she works with her trusted artisans to elevate these canvases with crystals, stones, and other ornaments according to her designs. Her artisans say a meditative prayer before each stitch. Once Khan sells a canvas, she offers a generous additional percentage back to the artist. Her contract stipulates that she will not use any paint to conflict with the artist’s paintwork. “It’s a really good deal for these kids as  they are getting exposure with a very new concept. Now they all want to jump into bed with me.”

With more than 500,000 hours of experience over the past 30 years, Khan understands how her materials react to different fabrics. “I know what happens to jersey, tulle, and leather,” Khan says. “Using the same material on the same stitch on the base fabric, it changes the composition.”

Khan’s leap from jewelry design to embellished graffiti art came from a bathroom renovation in Khan’s Miami apartment. Three years ago, a street artist called Subi crashed her party and suggested to Khan that they take their bikes and ride around the neighborhood of Redwood, Miami. In recent months, Khan took Subi up on her offer. “We rode our bikes for two hours at night, saw what we saw, went out to dinner, and I asked if she painted bathroom walls,” remembers Khan. Soon, Subi was painting flying figures with wings on Khan’s walls, despite Naeem’s protestations. “I told him, ‘I’m paying for it,’ and if he doesn’t like it we can paint over it. Of course, he is now nuts for it.” 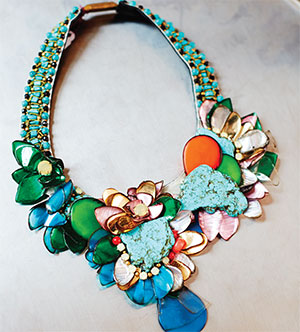 Risk-taking Ranjana has been on a mission ever since she left India in her early twenties, to escape an arranged marriage. “I had to take charge,” she says. “At 24, my parents thought I was over the hill. When this proposal came I decided to go to Toronto to check him out. Thank God I was just engaged and not married. I didn’t like what I saw.” Khan then left for New York, armed with a six-month visa and determination galore. Within three weeks she met Naeem. A year and a half later, they eloped in secret. Two sons and 18 years later—complete with valuable osmosis from the hand embellishment business operated by generations of Naeem’s family— Khan started her first company, supplying European couture designers with embellishment and jewelry ideas. “I began to think outside the box,” she says. “For example, Gaultier‘s iconic tulle pearl necklace was my idea.” Her own jewelry line proved equally successful. Today, this sojourn into the netherworld of street art has captured her soul. (A fun aside: She offers facial yoga exercises on her website, rkyoga.com. After an impromptu demonstration on her floor I became an instant convert.)

At 59, Khan exudes absolute warmth and vitality. She shows no signs of slowing down, and thinks women should never give up on themselves. “People keep saying that life is short,” Khan says. “Life is long, so live it!”

On Trend: Girls Can Wear Sneakers Too