A Hill of Success

Her gorgeous gowns have been the choice of starlets, sirens, pageant queens, and prom princesses alike. But it’s hard work and heart, not just glitter, that’s the fabric of Sherri Hill Creations. WOMEN on the MOVE 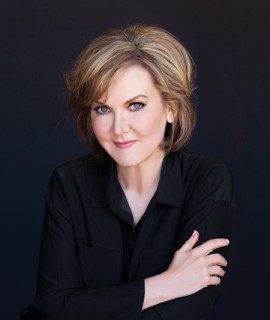 If you can’t reconcile the high-demand, sparkly, sophisticated yet whimsical gowns that Sherri Hill dreams up for prom- and pageant-bound beauties with her Little House on the Prairie-like beginnings, working in her parents general stores among bolts of sturdy cotton fabric and all other sorts of practical sundries, that’s okay. Her competition didn’t see it coming, either.

They didn’t see that this small-town girl would drape the likes of actress Selena Gomez, socialites Kendall Jenner and Paris Hilton, and southern singing chanteuses Miranda Lambert and Carrie Underwood. That’s not to mention Miss USA 2012 Olivia Culpo and thousands of glammed up girls who don her apparel on that most auspicious night of all, prom. That’s Hill’s secret. She dreams big, works hard, and, like many of her glamorous devotees, she makes it look effortless.

SPINNING A SILK SHIFT FROM A GUNNY SACK

My parents had very small-town stores, and we sold clothing, fabrics, everything,” says Hill. “I became interested in the fashion side of that and had a vivid imagination. At the time we were selling practical clothes for a small farming community. I thought the cottons were more like silk!” she laughs. “As a child you can visualize anything you want.” Her folks encouraged Hill and her siblings to dream big and remember that a person has to make her own name in the world.

“No one owes you a living,” is a credo Hill learned from her dad. Her father saw greatness in his talented daughter, and sensed that she would eventually thrive. “He made it an adventure,” she recalls. “It was fun to do a great job; fun to be the best at everything you do and to try to do it the best possible way you can. That stuck with me. It was almost a treat to go to work at that point.” So, it was a surprise to no one that when Hill launched her own dress design company in 2009, it became a family affair.

FROM PETITE TO PAGEANT PERFECT

With her husband and children involved in everything from sales to social media, Hill has found a way to make work fun for her whole family, just like her father did for her. Meanwhile, Sherri Hill Collections has become wildly successful in a very short time. She was recently named one of 2014’s top 10 trending fashion designers by Google. Within a couple of years of hanging her shingle, she launched her collections during New York’s Fashion Week— where, during her 2011 debut, Kendall Jenner strutted the runway wearing Hill’s gamine gowns.

“We love the whole idea of these young girls beginning their life,” says Hill. “For some of our customers, it’s their first formal dress. Kendall was very appropriate for that. She was 15 years old and had never done modeling before, so it was a fun adventure for both of us.“At the beginning we had some struggles,” admits Hill of her early days launching the line. “A lot of stores didn’t buy our collections because they didn’t think that we would be able to deliver. 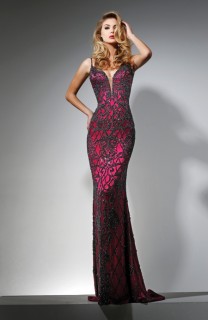 I don’t hold it against the people that didn’t think that we would make it—but I will never forget the people who did.” One early supporter was an outspoken competitor, who stood up in front of a large group of potential clients and said, “What have you lost if she doesn’t ship? You don’t have to pay for it. You’ve lost nothing. I’m putting my money on her!”

That vote of confidence led Hill’s first clients to place orders. “We didn’t know what happened. All of a sudden, girls started calling the stores looking for our dresses, or going into stores asking, ‘Do you carry Sherri Hill?’ Suddenly we were in all of these shops across the U.S. We had a business.” Perhaps Hill, who recently launched a bridal line, gets her modesty from her working-class roots. Her success, however, is no accident. The dresses are stunning—both fun and appropriately sexy, with fashion-forward fabrics, intricate beading, cutting-edge designs, and sweeping, swirling skirts that have caught the eye of top celebrities. And the numbers don’t lie.

“There is a buzz! We were just thrilled a couple of weeks ago when we passed a million followers on Instagram,” she says. Hill’s glammy get-ups aren’t just the figure-draped dreams of social-media savvy teenage girls, waiting for a corsage to be slipped on a wrist—they’re a dream come true for parents, too. In 2013, Hill once again used New York Fashion Week to make a splash, but this time she had Duck Dynasty’s young Sadie Robertson hit the runway in the Hill-Robertson “Daddy Approved” collaboration—a line of dresses that satisfy both a young woman’s desire to look divine, and parents’ wishes that she remain appropriately demure. The line launched to much PG-approval in spring of last year.

“The collection is something that you know for sure is not going to get you in trouble when you walk out the door. Your dad isn’t going to say, ‘What?! You can’t wear that!” Hill is creating another new dress collection with teen actress Bella Thorne. “It was just a natural cooperation. She’s doing a collection of dresses with us that are very much Bella.”

That inspiration comes directly from the quality of the garment, because Hill believes, first and foremost, that a dress can look great on you no matter your size; it’s the quality of the garment that counts. “Whether you are a zero or a 20, it is just going to be a better fit, a better look. I love that about today’s society. Each woman, each girl, can be individual, and this is why we have this broad collection—so each girl has her own look.”

Imitation may well be the sincerest form of flattery, but it can also be the sneakiest form of thievery. With her skyrocketing popularity, Hill has made the unfortunate discovery that her designs have been nabbed by those trying to trick young women desperate for a Hill original—who wind up with goods that are less than great. For that reason, Hill has taken on the crusade of fighting copyright piracy. “Websites will put up the picture [of my dresses] at a ridiculously cheap price.

Well, all these girls think they’re getting something from our production, our factory. They buy a dress for $123, which is actually like a $400 to $500 dollar dress, and then they get it and it is like a Halloween costume; it’s junk.” says Hill. “So one of the reasons we fight it is to protect our name, to protect our image. It is my family’s livelihood. But another reason is because those little girls can’t get their money back.”

While Hill isn’t keen on giving away her designs to pirates, she is happy to donate to a far worthier cause. She co-created the charity program “That’s My Dress!,” in which Sherri Hill Creations donates prom dresses to the daughters of servicemen and women. To Hill’s observation, enlisted personnel don’t earn the kind of income that would make a Sherri Hill gown an easy-on-the-wallet acquisition.

“We need to thank them for what they do. Oh my goodness, they are the ones who are sacrificing so that all of us can have what we have; this lifestyle so that girls can have proms,” Hill insists emphatically. “It’s an organization we’ve become more and more involved in just because we’ve seen the difference it makes for some of those young girls. It’s very heart warming to see how excited they are. Like one girl who thanked us for the dress we gave her—her father had been deployed three times.”

Meanwhile, Hill just keeps spreading thread into gold—seen glinting and twirling across a dance floor, on the red carpet, beneath a tiara, and on the stage. And though her humble and clear-eyed view of her good fortune keeps her firmly grounded in reality, that little girl from Oklahoma still continues to dream, and dream big. “I didn’t know that I couldn’t do something, so I attempted it and once you’re in you have to make it work.” These are words for any young woman to cherish; as encouraging and beautiful to wear as a Sherri Hill original. “I think,” she says, “that things actually have turned out exactly the way they should.”

On Trend: Girls Can Wear Sneakers Too