Red wine, a side of escargot, and a quick roll in the hay? Sounds like a lovely evening. Yes, but these are also on the menu for some of the most innovative treatments around the world .

Once upon a time, the average woman had little more in her beauty arsenal than a brush, a bar of soap, and a jar of petroleum jelly. Today, the billion-dollar spa and beauty industry churns out potions with ingredients so precious they’re measured by the ounce (Gold, platinum. . . Koishimaru silk, anyone?), and clinics offer body-perfecting treatments from the luxurious to the utterly off-the-wall. It’s all part of our constant—often extreme—quest to outsmart the aging process. We thought we’d already heard it all.

But since that elixir of eternal youth has yet to be found, the beauty industry— as always—continues to push its boundaries. And though I’ll certainly admit to being a spa and beauty junkie, I have yet to splurge on $1,000 moisturizer (La Prairie’s Cellular Cream Platinum Rare) or allow my fat to be sucked out through a pipe. I have, however, tried and tested treatments, products, and procedures in some of the most far-fetched and far-flung places imaginable. Here, I run through some of the global beauty industry’s latest offerings—from the sticky to the sublime.

The Snail Facial (Siberia) The winner of the ultimate in unconventional, non-invasive beauty treatments goes to the Siberian Snail Facial— perhaps the oddest sounding yet addictive beauty trend ever conceived. Large African snails are placed on the skin and left to roam, leaving a trail of slime that offers a host of beautyboosting properties. According to the claims of Chilean farmers who are hired to prepare the slimy suckers for French dining tables, Helix Aspersa Müller Glycoconjugates—a complex structure of proteins, glycolic acids, and elastin better known as “snail slime”—leave them with decidedly smoother skin. The extract is nature’s way of protecting snails from UV rays, cuts, and bacteria, and contains properties that—as a facial—moisturizes and restores tissue damage from acne and scarring. For those who can’t stomach the idea of being a human garden path, an extract from the slime is now offered in products from Missha, Dr. Jart+, and Labcconte. 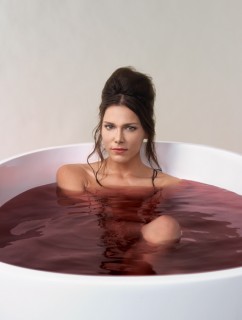 Vinotherapy (France) Where else but France would the world’s first wine spa set up shop? Quaintly nestled in picturesque Bordeaux, Les Sources De Caudalie Spa provides its signature Vinotherapy, aiding in the reduction of wrinkles, minimization of cellulite, and invigoration of skin. Using the argument that wine shouldn’t be confined to a glass, Les Sources De Caudalie claims that polyphenols—an antioxidant extracted from grape seeds—are more effective than vitamin E in fighting free radicals. The external applications vary from a hot red wine jet bath (great for boosting circulation) to a honey-and-wine wrap that helps shift cellulite. They employ some of the finest wines in France for treatments, many of which are also on the menu in its restaurant, and those who wish to go for the more traditional route of “in vino veritas” will find ample opportunity to do so.

Hay Body Wrap (Italy) The South Tyrol region of Italy has offered a new meaning to the term “rolling in the hay,” thanks to its now-famous Hay Bath therapy. This treatment soothes joint pain while opening pores, stimulating weight loss, boosting the immune system, and aiding in detoxification. It goes like this: While lying on a waterbed—heated to more than 100 degrees Fahrenheit—guests are wrapped in wet, fermenting hay that’s infused with herbs such as arnica, thyme, and lady’s mantle. In this blissful bound state, clients sweat out their impurities as the herbs’ healing properties do their stuff.

Leech Therapy (Austria) This oft-unsettling—yet time-tested—alternative therapy involves the application of leeches to skin, promoting excellent blood circulation and detoxification. Leeching practitioners claim that the saliva of leeches contains a natural anticoagulant. This helps remove toxic build-up while having a thinning effect on heavy blood. The treatment, medically known as hirudotherapy, is hardly new. Ancient Egyptians used leeches to cure a plethora of ailments, from flatulence to headaches. In recent years, it took an endorsement from seemingly ageless actress Demi Moore, who described this treatment at a spa in Austria as a dream-cometrue. The leeches used in today’s therapy—FDA-approved and popularized since 2004 as a medical device—bear little resemblance to the frightening discoveries you’d find in your socks after a hike. Instead, they’re European– farmed specifically for the treatment, and primed to make you feel great.

Dracula Therapy (Transylvania) If the notion of leeches sucking your blood sounds uninviting, consider having your blood injected in you, courtesy of this “Vampire Facelift.” Also known as Stimulated Self Serum skin therapy (or S3), this treatment was invented by a London-based French MD named Dr. Daniel Sister. A test tube of your own blood is removed from your body—ensuring no risk of allergic reaction or side-affects—and placed in a centrifuge to separate the platelet-rich plasma. The plasma is then mixed with vitamins and amino acids before it is promptly injected back into the face, via countless tiny injections. According to Dr. Sister’s claims, the super platelet serum is rich in natural proteins and growth factors that reverse visible signs of aging (wrinkles, dehydration, lackluster skin), heal scars, and stimulate DNA repair. This innovative treatment enjoys an international cult following among those who favor a chemical-free way to plumper, line-free skin. 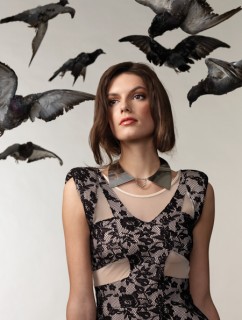 Pigeon Poo Facial (Japan) Japanese geishas, known for their alabaster complexion, have long employed this urban scourge to remove heavy makeup while softening, nourishing, brightening, and smoothing their skin. The key elements of this secret beauty source are nitrogen-rich urea, natural enzymes, and the amino acid guanine, which experts claim brightens and heals the skin. (Guanine has also been said to give fish scales their iridescence.) Nightingale droppings are harvested on specialist farms in Japan before they’re sanitized via ultraviolet light, milled to a fine powder, and mixed with rice bran. Widely nicknamed the “Geisha Facial” and now readily available in the west, its traditional name is Uguisu. The powder, which can also be bought online, is called “Uguiso no fun,” which we daresay sums up the concept pretty well.

Bull Semen Hair Mask (England) There’s ever-more beauty-bounty from unseemly animal bi-product, courtesy of Aberdeen Angus bull semen. Sourced fresh from a farm in Cheshire, the semen is mixed with Katera, a protein-rich Iranian plant root, producing a mask known as ‘Viagra for the Hair.’ Discovered by London stylist Hari Salem—and seemingly taking styling cues from Cameron Diaz in There’s Something About Mary—this 45-minute intense conditioning treatment is a contender for the ultimate organic protein moisturizer, and has become a huge hit among London’s loveliest ladies.

The Labial Puff (Brazil) “Bigger is better” has long been a rule of thumb in Brazil, as proven by the nation’s lovely and curvaceous female population. Now, there’s a whole new trend sweeping Brazil’s booming cosmetic surgery industry: the augmentation of the labia. Elective surgery centered on a woman’s private parts is not a new phenomenon. First, there was vaginoplasty, the tightening of the walls of the vagina. Next, there’s the hoodectomy—or clitoral unhooding—which involves the reduction of skin over the clitoris to increase pleasure. The more common form of cosmetic vaginal rejuvenation, labioplasty, addresses all things Labia Minora and Majora. And now (drum roll, please) the Labial Puff, which creates a protruding Labia Majora. Adding shape and volume to the labia via permanent fat transfer or an injection of dermal filler, Sculptra Aesthetic, this is an empowering procedure of epic proportions.

What Your Nails Are Telling You

4 Women with Disabilities Show Us How to Rock a Bikini

Benefits of Giving Up Sugar