Experiencing the wild ride of perimenopause? Tame the ups and downs with the right herbs and supplements and keep in tune with your changing body.

Remember when you were invincible? In the not so distant past, you were multi-tasking like a fiend— managing a busy career, hectic home life, and whirlwind social calendar with the precision of a high-tech military operation. You could do just about anything, eat anything, and sleep for just a few hours a night while your body still functioned like clockwork. Nothing got to you, or brought you down. Then, one day in your 40s, “IT” happened. Like a thief in the night, “IT” snuck into your life. 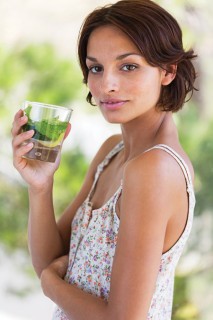 Suddenly you were forgetful, exhausted, and prey to physical symptoms like night sweats, weight gain, hot flashes, and irregular periods. You may have guessed that “IT” is the beginning of what some call “the Change”—the end of menstruation and the journey toward menopause. But you don’t just wake up one morning in menopause. There’s a roller coaster ride of shifts that occur as your body begins to slow down the production of female sex hormones. This stage is commonly referred to as perimenopause, and lasts an average of 7.5 years. It’s an individualized condition, meaning you and your friends are not likely to be experiencing things the same way.

While this may seem like the end of the world as you know it, it’s not all in your head. There are options available to help you tame the hormone roller coaster and bring back the formidable woman you know you can be. Many women are turning to natural herbs and botanicals to manage perimenopause, especially since the Women’s Health Initiative reported their concerns that hormone replacement therapy (HRT) may be linked to heart disease, breast cancer, and ovarian cancer. For women who have had cancer, HRT is simply not considered an option.

Herbs and botanicals have been used for centuries in various cultures to ameliorate hot flashes, night sweats, mood swings, and the other hormonerelated symptoms experienced by 75 percent of women in the latter half of their lives. In recent years these supplements have been studied to determine their safety and efficacy. Understanding what’s happening in your body to cause these symptoms is the key to choosing the right supplements.

As women enter perimenopause, estrogen levels become erratic—meaning they’re mostly on the decline but may have some ups and downs along the way. Progesterone levels also start to decline. This imbalance of estrogen and progesterone manifests in symptoms such as irregular periods, vaginal discomfort, incontinence, and weight gain. It’s theorized that hot flashes occur as a result of decreasing estrogen levels, sending “mixed messages” to the hypothalamus— the part of the brain that regulates the sex hormones, as well as body temperature.

Additionally, hormone fluctuations— estrogen in particular—affect the brain through interactions with neurotransmitters (brain chemicals that communicate information throughout the brain and body). Estrogen has a calming effect on the brain, so fluctuating levels in estrogen can result in “brain fog,” intense mood swings, and potentially the onset of depression.

“Looking at the properties of herbs and how they work poses a difficult problem, because conducting expensive, doubleblind studies that the traditional medical community is used to seeing is neither practical nor probable,” says Craig Koniver, M.D., of Primary Plus Organic Medicine, LLC in Charleston, South Carolina. “However, it is hard to ignore thousands of years of history—both oral and written—that proves the science and outcomes. If something is working, we as medical professionals need to pay attention.” On the whole, herbs and botanicals mimic estrogen, neurotransmitters, or bone building substances in our bodies, which allow them to address the symptoms of menopause effectively. Listed on the next page are some of the more noted herbal options. It’s important to note that there is not one botanical “fix,” and that optimal success is achieved when using these supplements in some combination.

PUTTING IT ALL TOGETHER

Timothy Morley, D.O., medical director of BodyLogicMD in New York City, recommends that women have comprehensive blood work to find out if there are any barriers to herbs’ effectiveness such as thyroid issues or liver problems. He also urges women to use probiotics to boost the efficacy of herbal supplements. Understand that what works for your friend may not work for you—just as it is with prescription medications. With a little ingenuity, and a nod to modern conventional, Chinese, and Native American folk medicine, you can successfully enjoy this roller coaster ride through “the change” and beyond. With the help of an integrative medicine specialist, you can be back on track to being that invincible you.

Cimicifuga Racemosa, better known as black cohosh, is a North American plant from the buttercup family that has been used as a successful remedy for premenstrual syndrome, perimenopause, menopause, and osteoporosis by Native Americans for centuries. A proprietary, standardized formulation of black cohosh (Cimi-Max) has been shown in clinical studies to reduce many of the concerns associated with hormonal imbalance, such as anxiety, mood swings, irritability, irregular or painful periods, weight gain, and hot flashes.

Black cohosh root contains chemicals similar to serotonin, a neurotransmitter found in your brain, which helps regulate mood and irritability levels. It also works as a selective estrogen receptor modulator (or SERM) by blocking the effects of excess estrogen, which help keep the levels of estrogen and progesterone in balance. Black cohosh contains several important antioxidants that offer protection against cellular damage known as oxidative stress. Black cohosh’s antioxidant properties have proven beneficial in treating pain and inflammation.

The active ingredients in soy are isoflavones such as genistein, daidzein, and glycitein. These soy isoflavones are phytoestrogens— meaning they mimic mild effects of estrogen in our bodies. Phytoestrogens in soy have been shown to confer many health benefits, including reduced risk of cardiovascular disease, improvement in mental acuity, and reduction in loss of bone density, as well as the improvement of hot flashes and vaginal dryness. Large population studies suggest that phytoestrogens can promote breast health. A 2012 University of Delaware study examined 1,200 women who received two soy servings daily for six weeks, and found that hot flashes decreased by 26 percent.

However, some studies conducted in the U.S. showed inconclusive results, combined with GMO issues regarding soy product integrity made some physicians lose confidence in soy’s ability to relieve menopausal symptoms. “If a woman has a personal or family history of breast cancer, she should avoid soy,” says Arielle Levitan, M.D., practicing internist and co-founder of Vous Vitamins.

Freshly ground flax seed is a plant estrogen that contains both omega-3 fatty acids and lignans. Flaxseed lignans are converted in the digestive tract to beneficial estrogenic compounds. These lignans mimic estrogen and bind to estrogen sites in your body, causing any excess estrogen that is on board to be eliminated through natural pathways in your body. Flax seed lignans offer protection from osteoporosis and breast cancer, and are associated with better cognitive function in menopausal women. A 2007 study conducted by the Mayo Clinic showed that women who consumed 40 grams of ground flaxseed daily had a significant decrease in the severity and frequency of their hot flashes. Study subjects also noticed marked improvements in mood as well as a decrease in joint or muscle pain.

Vitex agnus-castus, or chasteberry, has been used for centuries to treat irregular periods, PMS, and breast tenderness. Chasteberry acts on the brain neurotransmitter dopamine and has been shown to regulate various hormones, including prolactin and progesterone. Numerous clinical studies have demonstrated the benefits of chasteberry, including reduction in breast tenderness, headache, water retention, irritability, and mood change. Another study published in Human Psychopharmacology showed that chasteberry was as effective as Prozac in relieving the symptoms of premenstrual dysphoric disorder.

Angelica sinensis, or dong quai, is a traditional herb used in Chinese medicine that’s known for its ability to maintain female hormone balance. Dong quai contains bioactive compounds that may reduce hot flashes, boost immune function, and improve bone health. Dong qua is always used in combination with other remedies in Chinese medicine. A study examining the effects of dong quai and chamomile showed significant relief in hot flashes and insomnia when compared to placebo. It is important to note that dong quai is not indicated for use in women who experience heavy bleeding during their menstrual cycle.

Your body needs vitamin B6, B9, and B12 to metabolize estrogen. Vitamin B6 has been shown to help with hormonal symptoms such as fluid retention, anxiety, mood swings, and irritability. Vitamin B9— better known as folic acid—and vitamin B12 are both necessary for the synthesis and detoxification of hormones. Deficiencies of these vitamins can result in hormone imbalance.

Calcium is essential for many functions in our bodies, including hormone secretion. Calcium is a key nutrient for reducing the risk of osteoporosis and reduces symptoms of premenstrual syndrome and migraine. As we age, bones slowly lose calcium, particularly in post-menopausal women, resulting in osteoporosis.

Magnesium for the Win

Forgo The Hassle Of Pill-Popping With Supplement Sprays