In your quest to live healthier, you’ve switched to natural cleaners, kicked up consumption of fresh,  organic produce, and joined  a gym. While these are great  moves, one change could be  a lifesaver. Stop slumping in  that chair and stand tall.

People sit between eight and 10 hours a day—50 to 60 percent of waking hours—says Genevieve Healy, Ph.D., a  senior research fellow at the  University of Queensland  in Australia. It sounds odd,  as sitting is a part of everyday  life, but the time has come to rethink your chair.

Why? Humans were designed to move. It took a long time for sitting to become an activity shared by  the masses. Centuries ago,  sitting was largely reserved  for the privileged. Today’s world is designed for sitting,  and we’re faced with the stark realities of what’s  known as “sitting disease.”  “From garage door openers  to remote controls, we’ve  engineered movement out of  our lifestyle in a drive  towards efficiency,” says  Peter Katzmarzyk, Ph.D.,  associate executive director for population and public  health sciences at  Pennington Biomed

ical  Research Center in Baton Rouge, Louisiana. That  efficiency could cost you  your life: “The more time spent sitting, the greater the  risk of dying,” Dr.  Katzmarzyk says. Some experts have even dubbed sitting, the new smoking.

The potential for premature death is the takeaway from a study in the  American Journal of Epidemiology. The  study, conducted over 13  years, shows that women  who sat more than six hours a day, regardless of exercise, were 37 percent more likely to die of myriad causes (including heart disease and cancer)  than women who sat less than  three hours a day. Men who logged the same sitting time  were 18 percent more likely to  die from a plethora of causes. 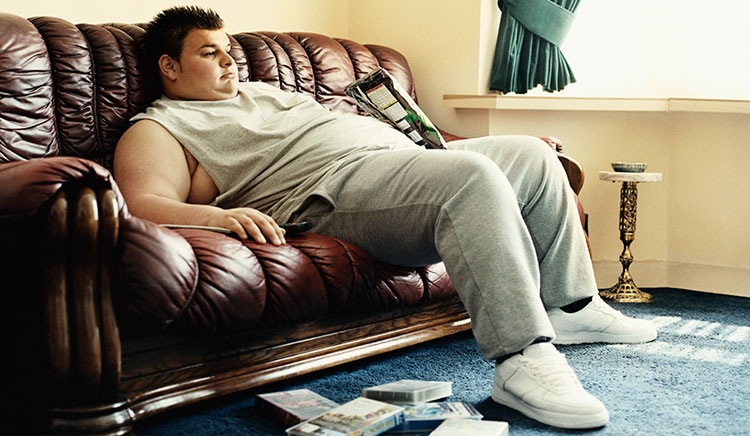 Lots of sitting, combined with low physical activity, increases those numbers  to 94 percent in women  and 48 percent in men. Prolonged sitting appears to have big metabolic consequences. It influences  variables like cholesterol, triglycerides, resting blood pressure, fasting plasma glucose, and leptin. These  are biomarkers of chronic  conditions such as cardio-vascular disease.

Excess sitting has also  been linked to type 2 diabetes, depression, cancer, and  obesity. A study in the  journal Obesity  found that the  25 percent of people who  take minimal sitting breaks  during the day have a two  and a half-centimeter larger  waist circumference on  average than the 25 percent  of people who took the most  breaks. “Even if you do 30 or  60 minutes of exercise but sit the majority of the day, that’s  bad for your health,” says  Healy, one of the authors of  the study.

How does standing slim a  waist? “You’re engaging the large postural muscles in  your legs and back, resulting  in increased muscle contraction activity and associated  uptake of blood fats and  blood sugars,” says Healy. Add movement to those  breaks, and you use more  energy, which impacts  energy balance and therefore  your waistline.

HOW MUCH  IS TOO MUCH

As research about sitting’s detrimental effects continues to  mount, questions loom.  The biggest one: How much  sitting is too much?

Researchers can’t say for  sure. One of Katzmarzyk’s  studies found that reducing  sitting time to less than three  hours a day could increase  life expectancy of Americans  by two years. (The current  life expectancy for men is  76.4 years, women 81.2  years). That’s not yet enough  to make definitive recommendations, but researchers  know this: “The relationship  between sitting and health  consequences is linear,  Katzmarzyk says. “More  sitting is clearly bad.”

They also know that sitting less doesn’t give you a pass  from the gym. For optimal  health benefits, you still  need to log recommended
amounts of physical activity  (150 minutes of moderate- intensity or 75 minutes of  high-intensity aerobic  activity, as well as two or  more strength-training  activities a week). “There are  gains to be made in the gym that can’t be replicated  through light-intensity  movements,” notes Healy. If  you’re not sitting, you’re  either standing or moving, hence the proliferation of  treadmill desks, desk cycles,  and stand-up desks, but  these also create problems.

Walking and cycling at the  office can decrease computer work performance,  slowing typing and increasing mistakes. Standing while  working, on the other hand, can cause other issues. “It’s  more tiring than sitting, using 20 percent more  energy,” says Alan Hedge,  Ph.D., director of the  human factors and ergonomics laboratory at  Cornell University in  Ithaca, New York. It also increases risk of varicose  veins and places strain on the circulatory system in the  legs, feet, and back, which can increase low-back discomfort and negatively impact men in particular  with heart disease.

DANGERS OF SITTING TOO LONG

All of this leaves you in an interesting position, given that  you’re neither supposed to  sit nor stand too much. So what’s a health-seeking soul  to do? Simply put, take more  butt breaks, preferably every hour—if not sooner.

A study in Medicine &  Science in Sports & Exercise  has  found that walking just five  minutes every hour in the  midst of three hours of  sitting actually prevents  some of the harmful effects  of sitting. Healy, meanwhile,  suggests that you stand at  least every 30 minutes—a  recommendation Australia  has added to its national  physical activity guidelines.

It’s not just about standing  more often, but changing  your posture when you do  stand, which is why walking  is so beneficial. “The best  posture is the next posture,  so change positions frequently,” says Healy, who  adds that most ill effects  from excess standing have  occurred in occupations that  entail long periods of  standing without regular  changes in posture.

Hedge recommends no  more than 20 minutes of  sitting, followed by a minute  of standing and two minutes  of moving and stretching.  Repeat this throughout the  day. If you want to stand  more while working, do it for  short periods. Avoid leaning  and awkward positions.

Researchers hope that  environmental and cultural  changes will begin to occur  within public places to  make standing and moving  around more acceptable.  Until that time comes,  though, view the chair at  your work desk with a bit  more skepticism. Your life  really may depend on it.

Natural Remedies For All Hair Problems

10 Things that Happen When You Begin to Trust Yourself

How to Lose the Baby Weight

Get the Beauty Rest You Deserve