A Hard Look at Erectile Dysfunction

Erectile dysfunction (ED) is the subject of many a joke. Yet for the estimated 30 million men suffering from the condition, it’s no laughing matter. “Some men withdraw socially to the point of being reclusive,” says Miami urologist George M. Suarez, M.D. “Others channel their energies in negative directions such as more work, which leads to more stress.” Erectile dysfunction is rooted primarily in the physical, rather than the psychological. Once a cause has been determined, doctors can go ahead and treat the problem. “Depending on how far you’re willing to go,” says Brian Sperling, D.O., a respected urologist with Griffin Faculty Physicians in Derby, Connecticut, “I can make sure you’re having sex until the day you die.”

Although ED incidents increase with age, it’s a situation that can happen anytime. The Massachusetts Male Aging Study has found that while 40 percent of men aged 40 were affected, this number climbed to 70 percent in men who were 70. It doesn’t always mean a complete loss of power to the penis, though. While men at the far end of the spectrum can’t get any erection whatsoever, others experience ED as trouble maintaining an erection once they get one.

Both the mind and body may have a part in the issue. Stress and depression can play a role, though anxiety is the worst. “If men are anxious about performing, especially with a new partner, adrenaline can constrict blood vessels in the penis, making erection difficult,” says Abraham Morgentaler, M.D., founder and director of Men’s Health Boston and author of Why Men Fake It.

For about 80 percent of men, though, ED is grounded in physical causes, especially conditions that affect blood vessels. “Think of the penis as a big blood vessel,” says Morgentaler. “What’s bad for blood vessels is bad for erections.” Among these obstacles are conditions such as diabetes, obesity, high blood pressure, high cholesterol, and heart disease. (Problems with erections can also signal heart issues, Sperling says.) Other physical causes of ED include medications that treat hypertension and diabetes, Parkinson’s disease, multiple sclerosis, low testosterone, prostate cancer, and Peyronie’s Disease, a connective tissue disorder of the penis.

Whether the causes are more physical or psychological, though, the effects are equally as devastating. “To be sexual and have functioning equipment is a critical aspect of a man’s sense of manliness,” Morgentaler says. “When that fails, men feel like they’ve lost a critical part of themselves and may believe they have less to offer in relationships.” 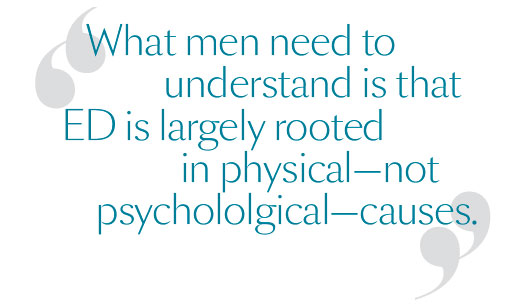 For most men, the first line of defense is often oral medications such as Viagra, Cialis, and Levitra. They block an enzyme called phosphodiesterase-5 that interferes with the ability to have an erection. Note: These medications won’t magically supercharge your sex drive; you still need to be aroused for them to take effect. Roughly two-thirds of men on these medications experience positive results, says Morgentaler, adding that this isn’t an option for certain men, including those taking nitrates for heart disease. If oral medications aren’t an option, injectable medications like Caverject and TriMix that go straight into the penis might work. There’s also a suppository, MUSE, placed into the urethra. However, if low testosterone is causing ED, (determined by a blood test), testosterone replacement therapy can increase lagging sexual desire and function.

Although the American Urological Association doesn’t support them, some men report positive results from supplements and herbal therapies like yohimbine, ginkgo biloba, and L-arginine, says Sperling. Because they haven’t been well studied and may interfere with medications you’re already taking, consult your physician before trying any of them. Stem cell treatments for ED are the newest option available and are getting great reviews from patients. These office-based treatments use patients’ own stem cells to repair the nerves and vessels, restoring natural erectile function, and are done under local anesthesia and involve no down time. Although not yet approved by the FDA, men can enroll in clinical trials through the website Agelesshealth.com. Surgery should only be considered after you’ve exhausted every other possibility, Suarez says. For most men, surgery entails installing a prosthetic implant. Meanwhile, a small number of men, usually those who have suffered a pelvic injury, might be eligible for vascular surgery to increase blood flow to the penis.

Fortunately, ED is reversible and preventable through a healthy lifestyle. If you’re a smoker, quit. Drink alcohol sparingly. (“Just two drinks can affect erectile function,” Sperling says.) Prioritize sleep. Chronic sleep deprivation can affect hormone levels and blood vessels. Studies also show that weight loss can alleviate ED. Slim down with regular exercise and a healthy diet. While you can’t change your age, you can work around it. Because your reserve power is less as you age—even if things are working properly—conditions such as mood, setting, and partner have to be increasingly perfect for things to work, Morgentaler says. And if you’re a woman whose partner is struggling with ED, show your guy some extra TLC. According to Morgentaler: “It’s important for men with ED to hear that their partner values them and sees them as manly.”