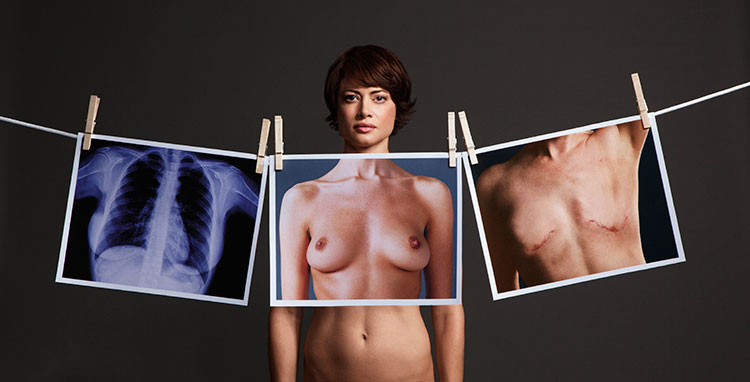 In February 2013, actress Angelina Jolie—confronted with her high genetic risk for breast cancer—made the rational choice to preserve her health and undergo an elective bilateral mastectomy. Two months later, she shared this choice with women around the world, displaying the kind of selfless and inspiring behavior we have come to expect from her. Angelina has again, employed those same attributes and underwent surgery to remove her fallopian tubes and ovaries in March of this year (2015).

It is highly unusual (extraordinary, really) for a beauty icon to tarnish her glamorous image in favor of creating awareness of genetically linked breast and ovarian cancers. But then, Jolie has always used her celebrity status as a positive humanitarian force. In her “special envoy” role with the United Nations, she has worked tirelessly to provide shelter, food, and medical care to refugees and displaced people throughout the world. Now, she seems to have chosen another worthy cause to champion: a proactive approach against breast cancer.

Jolie was diagnosed with a BRCA1 gene mutation, which dramatically increases her risk of developing both breast and ovarian cancer. Marcheline Bertrand, Jolie’s mother, died at age 56, following an eight-year battle with ovarian cancer. Bertrand’s cancer was likely linked to this same genetic mutation. In an effort to protect her health and to prevent her own children from experiencing this same loss, Jolie elected to short circuit her genetic fate and have her breast tissue, ovaries, and fallopian tubes prophylactically removed. 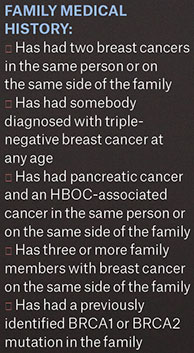 These events have brought genetic testing—as well as breast and ovarian cancer management—into the spotlight. However, very little practical knowledge or guidance exists for women with regard to managing their own health risks.

BRCA1 and BRCA2 belong to a class of genes called tumor suppressors that normally ensure the stability of cell DNA and prevent uncontrolled cell growth, thereby preventing the formation of cancers. Abnormalities in BRCA1 and BRCA2 genes primarily lead to increased risk of developing breast and ovarian cancers. These mutations have also been shown to increase the incidence of melanoma as well as prostate, cervical, pancreatic, gastric, gallbladder, bile duct, and colon cancers. If anyone—woman or man—inherits a faulty variation of this gene, the risk for developing cancer increases. It does not, however, guarantee that they will develop cancer in their lifetime.

American women currently face a 12 percent risk of developing breast cancer in their lifetime, but this risk becomes 50 to 85 percent when they have a hereditary breast and ovarian cancer (HBOC) syndrome due to mutations in the BRCA1 and BRCA2 genes. Although ovarian cancer is less common than breast cancer, and seen in less than 1 percent of American women, the risk is between 15 and 40 percent for patients with HBOC. While we do not typically associate breast cancer with men, since it is only seen in 0.1 percent of the general population, this risk increases 100-fold to about 6 to 10 percent in men with HBOC. Our ability to perform genetic testing allows every person the opportunity to understand and manage his or her risk for these hereditary disorders.

Most women who develop breast and ovarian cancer do not have a BRCA mutation. Mutations are only identified in approximately ten percent of patients with breast cancer, and less than 15 percent of patients with ovarian cancer. However, if you suspect that your are at risk for HBOC, the first step in determining your true risk is working with a qualified physician to evaluate your personal and family medical history. Genetic counseling—recommended prior to BRCA testing—usually involves a risk assessment and discussions about the indications for genetic testing, the accuracy of testing methods, the medical and psychological implications of a positive or a negative test result, and the risk of passing a mutation on to children.

The results of genetic testing are both confidential and privileged information. In 2008, the Genetic Information Nondiscrimination Act (GINA) became federal law, prohibiting discrimination based on genetic information in relation to health insurance and employment. The law does not, however, cover life insurance, disability insurance, or long-term care insurance. When applying for these types of insurance, people may be asked to sign forms that give an insurance company permission to access their medical records. The insurance company may take genetic testing results into account when making decisions about coverage. The testing is expensive, but is covered by most insurance companies for high-risk patients.

When someone has been identified as a BRCA gene carrier prior to a cancer diagnosis, it empowers him or her to manage the risk and proactively make an informed choice about a course of action.

Prophylactic surgery was Jolie’s choice, and involves removing as much of the “at-risk” tissue as possible to reduce the chance of developing cancer. Although bilateral prophylactic mastectomy (the removal of healthy breasts) and prophylactic salpingo-oophorectomy (the removal of healthy fallopian tubes and ovaries) dramatically reduces the risk of cancer, it does not reduce the risk to zero. Even with meticulous surgery, 100 percent of the at-risk breast or ovarian tissue is not removed. However, the risk reduction is substantial. I if done while a woman is pre-menopausal, prophylactic bilateral salpingo–oophorectomy decreases the risk of breast cancer by 50 percent and the risk of fallopian tube and ovarian cancer to 1 to 2 percent or less. Prophylactic mastectomy alone decreases the risk of breast cancer by 90 percent, to below 10 percent. In conjunction with prophylactic salpingo–oophorectomy, it is reduced by 95 percent. 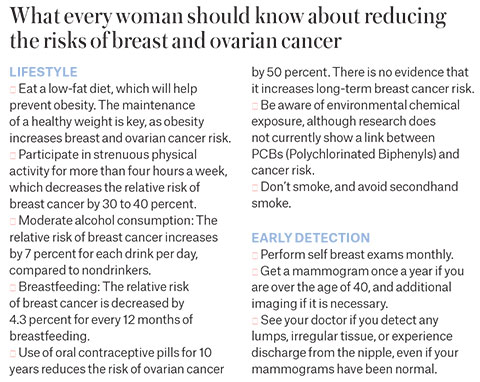 Prophylactic mastectomy has become more appealing in recent years due to advances in surgical techniques for mastectomy and reconstruction. However, recent data shows that only approximately 40 percent of women with a genetic mutation will undergo prophylactic mastectomies. Over the last few decades, we have learned that we can spare the skin, the areola, and even the nipple without substantial increases in breast cancer risk. Nipple-sparing mastectomy allows women to retain all of the skin of the breast and the nipple, allowing for a more natural appearance of a reconstructed breast. Advances in reconstructive techniques include options using a patient’s own tissue, as well as improvements in implants. These advances have helped to make the choice of undergoing prophylactic mastectomies easier.

Since 1998, federal law has mandated that insurance policies cover these reconstructive surgeries for breast cancer patients. However, the laws are less clear for prophylactic mastectomies. That said, surveys show that women with genetic mutations who wish to undergo prophylactic mastectomies and breast reconstruction have not had trouble getting their surgeries covered. Statistics show that only 37 percent of women with breast cancer have breast reconstruction after mastectomy, due to a lack of education regarding their options, according to James Stern, MD, board-certified plastic surgeon in South Florida. Conversely, women considering risk-reducing bilateral prophylactic mastectomy tend to be a unique population of patients, and are more likely to seek out information regarding reconstructive options. They are significantly more likely to have immediate breast reconstruction. Studies have shown that women have markedly better body image and self-esteem when they have immediate reconstruction. 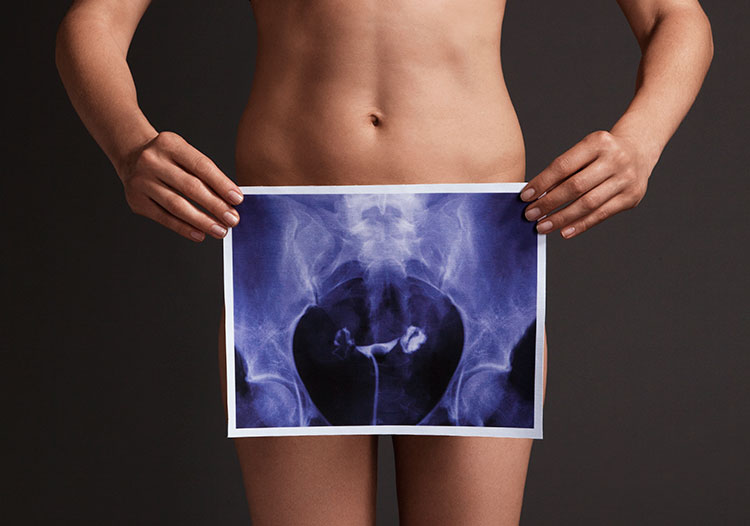 Although elective removal of the fallopian tubes and ovaries reduces the risk of both ovarian and breast cancers, it may precipitate a sudden onset of early menopause—which places women at risk for osteoporosis, memory impairment, mood disorders, insomnia, weight gain, and reduced sexual function. “Natural hormone replacement with bio-identical hormones can alleviate these symptoms,” says Neal Rouzier, MD, medical director of Preventive Medicine Clinics of Palm Springs. “Although there is a lot of controversy to date, there is no scientific evidence that it increases the risk for developing cancer after prophylactic mastectomy or oophorectomy.” However, estrogen may cause certain types of cancer to grow more rapidly. For women who are concerned about taking hormones, supplements containing black cohosh, calcium, magnesium, and amino acids can control symptoms. Quality-of-life issues and health concerns need to be carefully weighed to determine a best individual therapy.

Surveillance is another form of risk management, and involves implementing aggressive screening strategies to attempt early diagnosis. This method does nothing to prevent HBOC or to reduce the risk of developing cancer, but attempts to diagnose it at an earlier stage when it is potentially curable. Intensive screening for breast cancer is normally recommended beginning at the age 25—or 10 years earlier than one’s youngest relative was diagnosed. Breast cancer screening includes mammography, breast MRI, biannual clinical breast examination, and monthly self-examination. Ovarian cancer screening includes pelvic ultrasounds and blood tests every six months, and normally begins at 35, or five to 10 years earlier than your youngest relative with ovarian cancer was diagnosed. This is the path taken by women who want to preserve fertility, are not ready for surgery, or choose not to proceed with prophylactic surgery.

is the third potential avenue women with HBOC can take, in addition to increased surveillance. For ovarian cancer, this involves the use of oral contraceptives. These have been shown to reduce ovarian cancer risk by approximately 5 percent per year—up to 50 percent at 10 years of use. There is no evidence that this increases breast cancer risk, either while taking oral contraceptives or for 10 years after they are stopped. For breast cancer risk, estrogen-blocking medications such as Tamoxifen have been used, which have been shown to reduce the risk of developing estrogen-sensitive breast cancers in high-risk women by 50 percent. However, there is not much data evaluating their benefit for breast cancer prevention in patients with genetic mutations. Although BRCA genetic testing has given the highest risk women a valuable way to manage their cancer risk, there are simple but important lifestyle changes that all women should implement. The goal of these changes is to reduce the risk of developing more common forms of breast and ovarian cancer, which account for 90 percent of all breast cancers and 85 percent of all ovarian cancer cases.

We can stack the deck against breast and ovarian cancers with a little common sense, a healthy diet, exercise, avoidance of cigarettes, a moderated intake of alcohol, and informed choices about hormonal therapies.