Dr. Kourosh Maddahi puts his money where his mouth is, and may hold the key to your future dental hygiene. 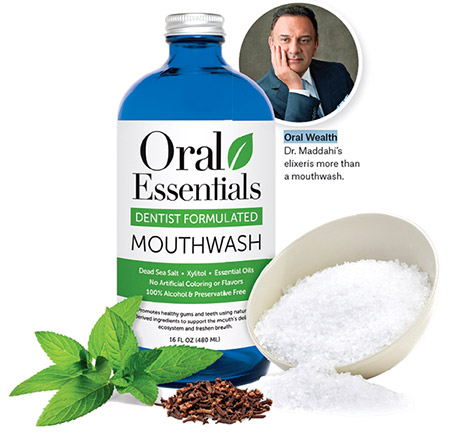 The old adage “you are what you eat” becomes ever more ponderous when we turn our attention to mouthwash. How safe is that blue or green liquid we swish in our mouths? What about the chemicals and dyes that churn around our gums like little dirt devils? These were the questions that Beverly Hills cosmetic dentist and bestselling author Dr. Kourosh Maddahi, D.D.S., asked himself before formulating his all-natural, non-toxic mouthwash Oral Essentials (oralessentials.com). “In the late nineties, if someone had gum disease, they were prescribed a particular mouthwash containing the FDA approved drug chlorhexidine,” says Dr. Maddahi. “Over time, I would see my patients’ teeth become a little brown, and their ability to taste weakened. Then, a report came out that people should not use this prescription mouthwash for more than three months. It was then that I started to look further into the side effects of, and possible problems with, mouthwashes.”

What he found was a laundry list of dangers—unnatural substances such as alcohol, dyes, preservatives, and such. Dr. Maddahi turned to his colleague, Dr. Hessam Nowzari, D.D.S., for advice. “He was the director of advanced periodontics at University of Southern California,” Maddahi says. “I said I wanted to develop a mouthwash that was actually good for people, because all the mouthwashes I looked at had some sort of drug in it.” Dr. Nowzari had just completed a 10-year gum-disease study on street children in Manila who were losing their four upper and four lower teeth to a particular kind of bacteria. The study involved asking the children to just rub sea salt on their gums. After a period the amount of bacteria was measured. Results showed there was no decrease in the bacteria, but the disease went away. “This is the phenomenal aspect of my mouthwash,” says Dr Maddahi. “Salt does not kill bacteria. It allows the bacteria to not express these toxins into the body. When you’re using mouthwashes that are anti-microbial, you’re killing good and bad bacteria chemically. After a while, it will lose its effectiveness because the bacteria will mutate and become stronger.”

So begs the question: Why not just rinse our mouth out with salt water? That’s better than chemical washes, according to Dr. Maddahi, but he does add other ingredients to his formula that augment oral health. “We added xylitol, because it actually stops the bacteria from processing the sugar,” he says. “They don’t colonize and so, to some degree, we control cavities.” Other ingredients added are aloe vera juice, which is great for gum health, as well as essential oils, whole leaf basil, and peppermint and wintergreen to control halitosis. “We went for the most basic things that we need in order to handle what happens in the mouth.”

Could Oral Essentials be the key to a pearly-white smile and good gum health? The results of current studies show plenty of promise. It would seem this is one swish that’ll be making a very big splash.

More Diabetics Than Ever!

Gifts for the Cook