For many people looking to trim up and get those endorphins pumping, simplicity reigns supreme— and that means good, old-fashioned running. Yet before leaping into a running regimen, take a few bits of training advice to heart.

I have a lot of friends who run. They run because it helps keep them sane, boosts their energy level, and burns a ton of calories. Some of those friends even do it for fun. I think I enjoyed running once—when I was young and able and chasing a finish line. However, the thought of running for health benefits alone hasn’t sounded appealing to me in a very long time.

That is until last year, when I found myself wanting to transition off the anti-depressant Zoloft and lose 10 pounds at the same time. Running—with its great anti- anxiety potential and killer calorie burn—sounded like a pretty valuable tool. One problem was I assumed that my 37-year-old self could jump back into running the way I did from season to season in high school.

“That’s the biggest mistake that patients make,” says Dr. Stefan Montgomery, a family and sports medicine physician teaching in the Family Practice Residency in Spartanburg, South Carolina. People start “with high aspirations and high self-esteem and think, Oh yeah, I remember back when I used to run six miles. If I just run one mile that should be no big deal. And they end up getting hurt or just hurting.”

Dr. Montgomery says that the key to starting out your running regimen pain-free is to hardly run at all in the beginning. He suggests you start slow. “Walk for a period of time to get the muscles supple and a little more fit,” he says. “That way, when you do start running, you don’t have as much soreness.” Dr. Montgomery’s own personal method involves walking for 40 minutes on day one, and then decreasing your walking time by two minutes and increasing the time you spend running by one minute each workout (i.e., day two would be 38 minutes walking, plus one minute of running).

“The body can handle that and then you ease into it. Now, it takes 20 workouts to get to 20 minutes of running, but you won’t have shin pain, you won’t have ankle soreness, you won’t have knee pain. It’s a nice and gradual increase in activity level,” says Dr. Montgomery. If this schedule feels too conservative for you, you can up the ante safely. If you feel more confident about the current shape you’re in, he advises that you try committing to a maximum increase of 10 percent per workout.

Running on a treadmill is one of the easiest ways to quantify your efforts—with information such as time, distance, and burned calories prominently featured on the display in front of you. Another number to pay attention to is pace. Dr. Montgomery says that most people will reach a “true running” pace (meaning that one foot is in the air at all times), somewhere between 3.5 and 4.5 miles per hour. Now, I have a bad habit of sideways-glancing to see how fast the person on the next treadmill is going and then fighting the competitive urge to push the “up” button on my control panel. Simply find the pace that works for you and stay there until your body—rather than your mind—tells you it’s time to kick it up a notch.

Listening to your body is what Dr.Montgomery says is the best way to know if your new running practice is indeed working out. As a trained yoga instructor, I knew this on an intellectual level, but I often chose to let my weight-loss goals override the wisdom of my body.

When you’re sore, it’s your body saying you did too much. “If you ignore that, then you can put yourself at risk of true injury,” says Dr. Montgomery. Some of the most common running maladies include iliotibial band syndrome, shin splints, and knee pain, all of which were happening to me when I started running again. I made excuses, blamed it on
fitness formmy age, and figured the pain would go away once my body got used to running.

I could not have been more wrong. The knee pain got worse, my IT bands became so inflamed that it hurt to climb the stairs, and my shin splints made walking a chore. Yet I continued to run for a time, because I had actually started to enjoy it. Aside from the physical pain, I was definitely experiencing the ballyhooed “runner’s high” and felt a sense of accomplishment each time the scale showed a slightly lower number than the week before.

It was a colossal revelation when Dr. Montgomery spoke to me about how a person running on an every-other-day schedule (which is recommended until you can run approximately six miles comfortably) ought to feel. “You should not be sore on the next running day. At all,” he says. “If you’re sore two days after your run, you either ran too far, or you hurt yourself.”
Had I known this from the beginning, I’d have done things differently. I stopped running two months ago because I reached that point where everything hurt. My body staged a “she won’t be able to ignore me now” assault. I was grounded. To my delight, I’ve missed my runs. Armed with Dr. Montgomery’s advice, I will try again. I’ll start out slowly, mindfully, without the inner coach who thinks I’m still a kid on the track team. 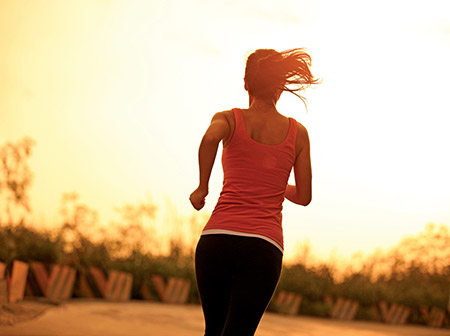 Besides the cardiovascular and psychological benefits of running, many people are attracted to its simplicity. There are no bags of equipment to carry or head protection required—just you and a pair of shoes. So it stands to reason that choosing the best shoes for your running style is pretty important.

Dr. Montgomery says that there’s a healthy, ongoing debate within the sports medicine community regarding what kind of sneakers people should be running in, ranging from the super cushiony models to a minimalist shoe or even barefoot.

Still, he asserts that when you start running you will probably run with a heel-strike pattern, meaning that your heel hits the ground before the ball of the foot. If this is the case, then a thick-soled shoe with lots of cushion will help you avoid heel pain.

Once you’ve been running for three to nine months, he says, you could try a minimalist shoe like a Nike Free, with a very thin sole. “These encourage you, because it feels better to have a forefoot strike where the ball of your foot hits first,” he says. “You’re almost running on your toes.”

If you do change from a cushiony shoe to a minimalist shoe, you do need to decrease your mileage by half and then slowly build back up to your previous distance. Do this by adding no more than 10 percent per workout.

One final note to consider: Running shoes should be replaced roughly every six months (or between 300 and 500 miles) if you’re running consistently, meaning three times a week. “The cushion does wear out over time and you lose the support,” Dr. Montgomery says. “The reason that you’re using the shoe—which is to protect you from the jarring landing going up into your knees and hips and back—goes away. And then you can start having pain… not because you’re doing anything wrong, but because you’ve just got shoes that aren’t supportive anymore.”

Creators of the Lost Arc