Even the best diet sometimes fails to get rid of that ‘stubborn’ fat around the middle. One solution is using the Zerona laser and HCG hormone in a combo method that melts critical mass.

Nadine, 39, had been eating a healthy diet and exercising regularly. But she was simply unable to shed the last pounds she wanted to, or to get rid of fat from certain critical areas around her midsection. “I had really changed up my diet to include more fish and less carbs. I’m also very active. I lost some weight on my own, but it wasn’t as fast or significant as I would have liked,” she says.

Nadine expressed her concern to Dr. Walter Tom, a cosmetic surgeon who practices in Santa Rosa, Calif., and who has pioneered a combination of laser and hormone therapy that seems to not only melt off those final pounds, but keep them off. “She was a perfect candidate: someone who has already done all the obvious things in terms of diet and exercise,” says Dr. Tom. Nadine also wanted to avoid liposuction, another method to get rid of specific areas of fat, because it was a surgical procedure and more expensive.

Enter the combo therapy of Zerona and HCG. This innovative approach helps patients reshape their bodies with a combination of HCG drops, a natural hormone that burns fat, and Zerona treatments, a low-light laser that reduces the size of fat cells. Together, these procedures seem to offer fast, sustainable results without having to deal with the complicated grocery list and nagging hunger that comes with your typical rollercoaster calorie-restrictive diet. 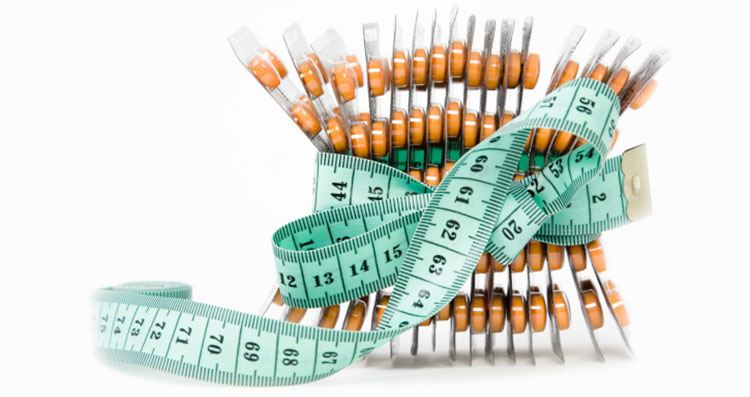 Traditionally, calorie-restrictive diets cause the body to burn through multiple energy sources before finally reaching your fat cells. “When we diet, we are starving our body,” says Dr. Tom. “Our body responds to this in four ways: Dropping our blood sugar, utilizing our liver energy sources (which cause you to feel fatigued throughout the day), breaking down our muscle protein and then, finally, turning to our fat cells for energy.”

One of the newest diet techniques is the use of a natural hormone called human chorionic gonadotrophin or HCG. Discovered by a British physician in India, this hormone is produced by women during pregnancy to prevent fetal starvation. It works by ignoring other sources of energy— such as muscle tissue—and going straight to the fat stores. When a non-pregnant person takes HCG with a restricted diet, it has the same effect.

“Even though you’re not taking in many calories, you amazingly don’t feel hungry or starved because you’re burning fat and not muscle,” says Dr. Meyer Eisenstein, a physician in Chicago, Ill., who has personally lost over 100 pounds with the HCG diet.

The diet is done in 3 phases:

The “loading” phase may seem counter-intuitive, but Dr. Tom explains that the founder of the protocol, Dr. Albert Simeons, found that the majority of the patients that try the HCG diet are “chronic dieters, so they already have a depletion of their energy stores.” In order for the diet to be successful, patients are encouraged to increase fatty food intake so their livers can be restocked.

Other than a few, rare short-term side effects, like possible hair loss, nausea and headaches, HCG is considered to be safe (though women with a history of ovarian cysts should avoid taking it, since it may stimulate growth). Dr. Tom also cautions women that HCG is used for infertility cases, so care should be taken with birth control since there is an increased chance of pregnancy.

On the laser front, the Zerona has in recent years become a go-to, non-invasive option for quick, location-specific fat reduction. While liposuction is still considered the gold standard because it removes fat cells permanently, not everyone wants to undergo the expense, the surgery or the downtime.

Zerona is a low-level laser therapy that looks like a four-prong octopus with multiple lights at the end of its tentacles. When the lights (which are lasers) are emitted onto the body, they make fat cells collapse and “leak out.” This fatty liquid goes through the lymphatic system and is eliminated as waste. The cells shrink because they’re no longer plumped up with fat, and you lose inches from your trouble spots.

“We’ve seen most people lose an average of five to seven inches off of their bodies. It also gives more of a sculpted look,” says Robert F. Jackson, M.D., a cosmetic surgeon who practices outside of Indianapolis, Ind. The treatment is done six times during the course of two weeks, and the shaping results stick, as long as you maintain a healthy weight.

Combining the two procedures improves results dramatically, according to Dr. Tom. “Zerona with HCG creates a synergistic effect. It’s definitely helped my patients get over the hump of losing those last 10 pounds,” he says. “It gives them… a huge difference that they haven’t gotten with a traditional diet and exercise program.”

OFF THE FAT TRACK

In Nadine’s case, she started the loading phase during a weekend, where she gorged on her favorite foods to build up her fat stores. For phase two, she ingested three drops of HCG daily at timed intervals, skipped breakfast (part of the protocol), and had a lunch and dinner that consisted of up to 500 calories of chicken, lean beef, white fish, vegetables, fruits, and a breadstick or a melba toast.

“Believe it or not, I wasn’t hungry, light-headed or had cravings. I was really able to do it for the entire 40 days,” she says. The reason, says Dr. Tom, is the way HCG releases energy from our fat stores to replace the calories we would normally consume throughout the day.

During the diet, Nadine came in for thrice-weekly Zerona sessions. She had no pain or discomfort, and listened to her iPod during the sessions. “The first week, I lost eight pounds. After the second week, I could see my waist looked slimmer and more sculpted too,” she adds.

Finally, Nadine moved into the maintenance phase, where she increased calories and added back some starches and natural sugars. “The program teaches you how to follow a healthy diet, so you can keep the weight off, and eat well,” she says. At the final weigh-in, she had shed 15 pounds, and a total of 17 ½ inches off her frame. “The result was amazing… This is the weight I had back in my 20s!”

Weight Loss thru Lifestyle, Not Diet