The restaurants we frequent and the ingredients we buy say a lot more about us than where we drink these days. More than simply “cool,” a cultivated culinary sense is elemental in the world’s great metropolitan hubs, where “farm-to-table,” “certified organic,” and “GMO-free” have become ubiquitous terms. Food co-ops and farmers’ markets are now favored over super sized supermarkets. Meanwhile, Whole Foods and Trader Joe’s have spurred a paradigm shift in the way consumers choose their grub.

Given the new found open-mindedness to quality and sourcing, many chefs feel it’s time for vegetables to move from side dish to main course.Still, so many among us hold tight to the notion that the most worthwhile meals involve some sort of meat protein. For decades, we’ve been trained to think of vegetarian eating as deprivation. (Dare we say rabbit food?) 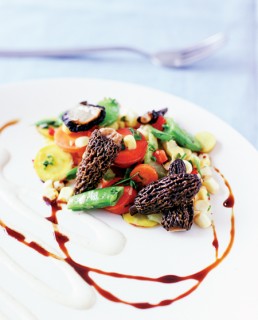 All the while, meat-free dishes have earned a bad reputation for being bland. Meanwhile, large segments of society are simply not consuming enough greens to remain healthy. New research from the University College London published in the Journal of Epidemiology & Community Health found that the overall risk of death reduced by 16 percent with each daily portion of vegetables.

“The phytochemicals in plant food are vital to keeping us healthy. Eating them fresh, and as close as to their whole form as we can. All the colors we  see in the vegetables we consume represent pigments, which in turn represent antioxidants. In very simple terms: By eating the colors of the rainbow,  you’re providing your body with the nutrition that it really wants and needs.”

Yes, vegetables are good for us. Some might roll their eyes at the simplicity of the statement. But it’s rather wonky thinking to assume, prior to  investigation, that a vegan, vegetarian, or raw meal—prepared thoughtfully by a world-class chef—can’t be as appetizing or comforting as a nice filet  mignon, a pasta Bolognese, or a roast chicken. Just one open-minded visit to a stellar vegetarian and vegan eatery such as Chef Andrew Dargue’s  Vanilla Black in Central London—one that employs cutting-edge techniques and artistic sensibilities—has the power to change the mind of even the  most stubborn naysayer.

Dargue’s own first experience of dining at a vegetarian restaurant was disappointing, to say the least. He recalls that the selections were unappetizing,  and the bland execution felt on par with a subpar recipe book from the seventies. Vanilla Black, which opened in 2004, was his declaration of  emancipation from that world. Rather than recreating the standard Thai curry or uninspired pasta dishes, his mission was to create beloved British  food, without the meat. (Vanilla Black’s menu excludes pasta and meat substitutes, and his chefs use a light hand with spices.)

“Pasta is always on a vegetarian menu because it’s easy and filling,” Dargue says. “I find that throwing a lot of spices in something is lazy.”Rather, his  trustiest ingredient is always imagination—an element on grand display in plates such as double-baked Ribblesdale pudding and smoked croquette (a riff on a dish of pineapple and gammon, or soft steak, that was popular in the eighties). 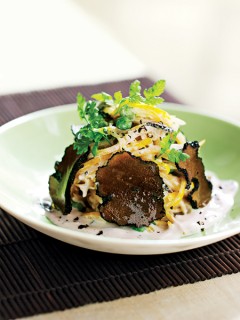 “You have the smokiness of the potatoes—a replacement for the  gammon—and an egg, which is sous-vide,” he says. Dargue’s use  of soy milk, rather than dairy milk, in his avocado ice cream is not  just a health choice. Soy milk allows an avocado’s essence to come  through while giving the ice cream a softer texture.In his attempt  to make his food more nutrient-rich and natural, he utilizes  vegetable leaves and stems whenever possible. He even  experiments with pinecones and roots (as with his triumphant  roast salsify, Jerusalem artichoke, and iced verbena dish).

A prevailing principle for Chef Dargue, and many other top  vegetarian chefs, is the notion of harmonious balance between  vegetable, starch, and protein. This union is thought to be  healthier and more palatable than vegetables alone. Meat-centric  restaurants with vegetarian options often assume that diners are  indiscriminating about the greens they consume; the vegetables  served don’t necessarily go all that well together.

Feedback about Vanilla Black has been resoundingly positive among meat eaters who expect to be stuck eating little more than bowls of salad. Dargue jokes that they come in dragging their feet behind their dates with a look that they don’t want to be there and mumbling that they are going to McDonald’s afterwards. By trying the food he says their perspective changes and their minds are opened up a little bit. “We don’t shout that we are a vegetable restaurant, we are just a nice restaurant who wants to appeal to everyone.”

New York-based Pure Food and Wine has a similar mission—create an upscale environment with a menu that leaves no one crying, “Where’s the beef?” Opened in 2004 by Sarma Melngailis, a raw food author who owns the juice bar One Lucky Duck, Pure Food and Wine is one of New York’s finest eateries—vegetarian or otherwise. Nothing is heated above 118 degrees Fahrenheit (48 degrees Celsius), and there are no ovens or cooktop surfaces in the kitchen. “We love the challenge of the strict parameters of raw and vegan,” says Pure’s executive chef David Kupperberg.

”It allows us to be creative—incorporating traditional and modernist cooking techniques then figuring out the rest on our own.”Kupperberg and team create exquisite platefuls of balanced fare— sweet corn and cashew tamales, portabella mushroom with cauliflower and horseradish aioli, and zucchini and heirloom tomato 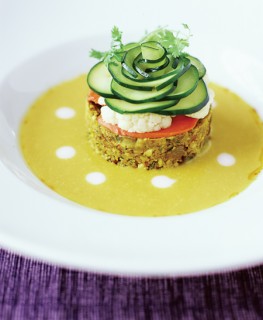 lasagna. Much of their ingredients come from the nearby Union Square Greenmarket. “We do a lot of intricate knife work throughout the night,” Kupperberg says.

“We want our food to be as beautiful as it is tasty, and to celebrate the natura
l beauty of the raw products. We also use a lot of dehydrators— dehydrating being the most basic, classic raw food techniques.”As with Dargue, Kupperberg often encounters meat devotees who don’t hold vegan or raw cooking in high regard. “We get quite a few people brought here by friends who might not realize they’re in a raw food restaurant until they see the menu,” he says. “The biggest preconception is that they’ll walk away hungry.”

Kupperberg points out that “stuffed”—the way one feels after a porterhouse steak—is not the same as well-rounded, healthy fullness. “Feeling satisfied  comes when every aspect of taste and experience of food is met—sweet, bitter, umami; crunchy and soft. When you meet those parameters with high-  quality protein, grain, and greens, you’re satiated in a way you might not necessarily feel with a great steak.

We use high-quality fats and proteins that fill you up in a better way than empty carbohydrates can.” Kupperberg—20 years a vegetarian—understands the  prejudice. “The food we serve is light and energizing, but can also be very filling,” he says. “Still, there’s no convincing some people, and that’s fine.”

Since the mid-90s, London’s The Gate restaurants (in Islington and in Hammersmith) have been doing their fair share of converting nonbelievers into  veggie-friendly diners. Its founders, brothers Adrian and Michael Daniel, have won over the U.K. food scene with a nuanced menu laced with their  grandmothers’ Indian, Arabic, and traditional Jewish sensibilities. As these cultures’ traditions would dictate, a vast variety of spices elevate the dishes.

(The frittata of roasted griolles, spinach, sweet potato, and goat cheese with peppercorns and green oil—composed of olive oil and parsley—is particularly  spectacular.)The Gate’s head chef Mariusz Wetrodzki, who studied under Adrian, has strong suspicions why these restaurants have remained popular. 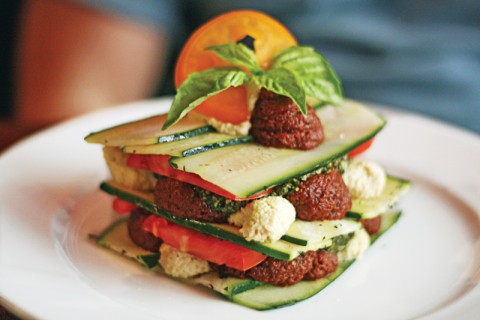 “Meat restaurants with  a vegetarian option will  be basic, as they go the  easy way,” he says.  While other restaurants  rush prep time, Gate  chefs spend a  significant amount of  time preparing the fresh  food beforehand—from  8 a.m. to 6 p.m. “We’ll  spend hours on one  dish.” Meanwhile,  Vantra Vitao on    London’s Oxford Street  —helmed by Zen vegan  chef Lenny Phong—prepares food that’s “not just for the body but for a clear mind.”Having conducted research for more than a decade, Phong offers a spectrum of organic vegan food, dubbed “gourmet living food.”

There are many wheat- and gluten-free options, as well as plates for those with nut sensitivities or who require low sugar diets. Vantra’s popular Lasagne Vivente—made with raw squash, tomato, pesto, and seed cheese—is a revelatory take on the rib-sticking classic.Chef Phong echoes Kupperberg, insisting that it’s significantly healthier to steam food below 48 degrees Celsius (118 degree Fahrenheit) rather than cook or fry it.

At 50 degrees or below, nutrients and beneficial enzymes remain intact.Phong’s Flaxseed tortillas mixed with green leaves go sublimely with sun flower seed cheese and pineapple and tomato salsa. Meanwhile, raw buckwheat pizza—with its cracker-like texture—could be likened to the finest canapé at the glitziest of dinner parties. As a complement to the menu, Vantra’s matcha mojito— green tea, mint, lime, kombucha, cucumber, and coconut nectar—is a hydrating, non-alcoholic drink that rivals the finest tipples in London.

Vantra Vitao is full virtually every night, with celebrities such as Woody Harrelson and Ellen Page making themselves regulars. According to Phong, more and more meat eaters are regularly coming in to dine, citing personalities such as Bill Clinton, Johnny Depp, and Mike Tyson, who have all turned vegetarian or vegan. “They come to improve their health,” Phong says. “They didn’t know they could enjoy vegetables.”

“It’s a gutsy thing to open a restaurant in the first place these days, let alone make it your mission to entice people into a healthier way of eating,” says Natural Gourmet Institute’s Prag. “There are certainly easier ways to make money. What the new generation of vegetarian and raw chefs are doing—including so many that come out of Natural Gourmet Institute—is based on their shared value system.

They want to make excellent food at the highest quality level, and share how the community will ultimately be enriched by eating this way.” Prag, who saw Kupperberg and a number of Pure Food and Wine’s line chefs come through the school, knows his stuff when it comes to vegetarian fare. “I have been fascinated by the healing power of macrobiotics [grain- and local vegetable-centric eating with little to no processed food or animal protein] since the 1980s,” Prag says.

“The philosophy is not all that wacky; it’s rather rooted in logic, in fact.” He points out that adopting a macrobiotic approach to eating is proven to remedy common ailments of our time, such as heart disease and cancer.“More than ever, there’s a general understanding that we have to all eat healthier,” adds Kupperberg. “Diabetes rates, malnutrition, and obesity are all hard to ignore.

Even if it’s considered trendy at the moment, I think that if people are eating better, then great. Being conscious of what we’re putting in our bodies isn’t a bad thing. It’s a great—and fun—challenge to create attractive environments and seduce diners into eating something that’s good for their health and the earth.”

The enthusiasm for healthy, great-tasting food shared by these restaurateurs and educators are declaring a new dawn for vegetarian cuisine. Meatless meals are not about deprivation; they’re quite the opposite. As more and more eateries are putting e ort and imagination into their food prep and menus, going vegetarian—one night a week or as a lifestyle—is turning out to be a true pleasure.

Why We’re Eating Breakfast, Lunch and Dinner In A Bowl

Diet Apps That Help Keep the Weight Off