It has many names—Syndrome X, insulin resistance syndrome, the deadly quartet, and its traditional title, the metabolic syndrome. Regardless of name, it’s a perfect storm of four risk factors that mean bad news for your health. Here’s how to deal with it.

So, here’s the bad news: Like the four horsemen of the apocalypse, there are four health risk factors that seem to travel as a group, adding up to something now called Syndrome X. They are: obesity, hypertension, elevated glucose and imbalanced cholesterol (a combination of low HDL (good) cholesterol and high LDL (bad) cholesterol). Doctors now realize that these four baddies generally occur together and dramatically increase the risk for coronary artery disease, stroke and type-2 diabetes.

Want the good news? According to anti-aging experts, a strict regimen of dietary management, exercise, supplements and hormone balancing can effectively reverse Syndrome X, bringing all of these things under control.

While researchers are unsure whether the syndrome is due to any one cause, most agree that all of the syndrome’s risk factors are closely related to obesity. With the obesity rate up sharply over the last 20 years (about one-third of all U.S. adults are obese), there has also been a parallel rise in the number of adults with Syndrome X, a.k.a. metabolic syndrome.

“My feeling is that weight gain is the root cause of virtually every one of the metabolic diseases,” says Mayer Eisenstein, M.D., a Chicago-based family practice doctor who spent decades delivering babies before changing his practice to focus on obesity.

Dr. Eisenstein says about 70 percent of his patients arrive at his clinic pre-diabetic or diabetic. “The first two things I look at in patients are their neck measurements and abdomen size,” he says. “The size of your neck is an independent risk factor for getting metabolic syndrome. It’s the same for the size of the abdomen.”

During the initial consultation, Drs. Vagnini and Eisenstein perform a series of blood work tests to check blood glucose levels. In particular, they measure the total amount of sugar in your blood; high levels are considered diabetic. From there, they develop a stringent protocol of dietary management, supplements, exercise and hormone balancing to reverse the syndrome’s effects.

According to Dr. Eisenstein, “the root of metabolic syndrome is obesity, one hundred percent.” In order to effectively reverse it, a diet that focuses on fat loss is key. “The diet I recommend in my books and in my practice is a modified, low-carbohydrate Mediterranean diet,” says Dr. Vagnini. “It consists of fruits, vegetables, whole grains, nuts and seeds, small amounts of low-saturated fat, olive oil and red wine.”

Most people with metabolic syndrome have trouble controlling their weight and blood sugar levels with their former ways of eating. Dr. Vagnini cites recent research that indicates that a low-carb Mediterranean diet is not only effective for fat loss, it lowers the elevated blood sugar characteristics of diabetes and pre-diabetes. Both Drs. Vagnini and Eisenstein also stress eliminating high-glycemic index carbohydrates from the diet, as well as simple sugars.

Another factor to consider? “I find that gastrointestinal problems … are roadblocks that prevent weight loss,” says Dr. Vagnini. “Many patients have digestive problems and so I recommend a high-potency antibiotic, as well as digestive enzymes and intestinal support formulas.” Another big recommendation is vitamin D.

“Vitamin D, at the present time, is one of the most critical nutrients, not only for cardiovascular disease but for diabetes and immunity,” confirms Dr. Vagnini. “I am finding that the majority of people coming into my centers in New York are vitamin D deficient.” Low levels of vitamin D3 have been linked to increases in dementia, diabetes, heart attack and even cancer.

Dr. Vagnini also recommends omega-3 fatty acids and resveratrol (a nutrient derived from the skin of wine grapes with high antioxidant properties) for preventing cardiovascular complications and improving diabetic status by helping with insulin sensitivity. “Resveratrol has been found to have profound cardiovascular benefits, and it acts as an anti-inflammatory,” he says.

As with virtually all age-related and obesity-related diseases, lack of exercise is one of the big contributing factors. Dr. Vagnini advocates cross-training: 20 minutes, four times a week of both weight-resistance training and aerobic exercise. “Resistance training improves insulin sensitivity and fat burning. Of course, if people can exercise on a more consistent basis, that’s good, too,” he says.

Another huge problem is the fact that, as we age, our hormones become imbalanced, which plays a key role in the development of metabolic syndrome, too. For men, that means a decrease in testosterone levels; for women, that includes a dip in their estrogen levels. “To treat the hormone imbalance, I use natural bio-identical hormone replacement therapy.” says Dr. Vagnini. 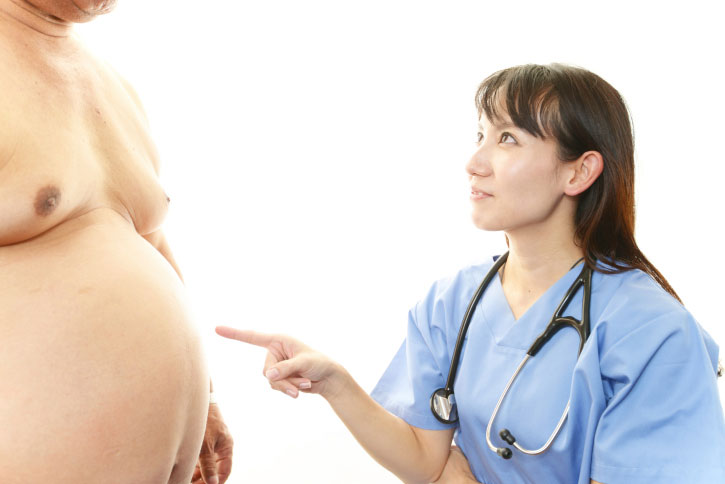 Those extra pounds of fat could be the tipping point in the battle for your health.

Diabetes—the word conjures up fear and resignation from a growing number of Americans. And why not, when 18.8 million Americans are diagnosed with diabetes and another 7 million remain undiagnosed, according to a 2011 report from the American Diabetes Association. It is a disease that knows no age or racial boundaries, and it remains closely related to a slew of other illnesses, from heart disease to kidney failure.

While there is no single factor that accounts for the development of diabetes, most doctors agree that obesity, more than any other element, tips the scale in the health equation. “Diabetes is almost a side effect of being obese,” says Tina Miranda, M.D., a South Florida cosmetic and anti-aging doctor who specializes in weight loss. “If diabetes has already started to set in, the patient has probably been overweight for several years.”

The first step in treating the disease is to test the patient’s blood and to measure their body composition. The next step is to change their lifestyle in terms of nutrition and exercise, while they remain on medication. A patient must lose weight, even a moderate amount, and move toward their ideal body weight. “When they come into my office, I ask them how much they weighed in high school. Different people have larger or smaller bone mass, etc., that need to be taken into consideration,” says Dr. Miranda.

While medication is necessary for more advanced cases, pharmaceuticals often contribute to the weight gain and the obesity issue remains. “There is no medication for obesity,” says Dr. Eisenstein. “You go to the gym, lose three to four pounds and give up. So the focus remains on medication and the obesity is never treated.”

“Treating diabetes with pharmaceuticals just covers up the problem,” he says. “The medication is life-saving for the short-term. But it is not a long-term answer. The long-term answer is to lose the fat, not even the weight, lose the fat.” Dr. Eisenstein says that he has more than 500 patients who are no longer diabetic thanks to weight loss.

Both Drs. Miranda and Eisenstein stress the importance of removing carbohydrates from your diet, which means rice, potatoes, bread, pasta, sugars and starches. “When you get drastically overweight, you need to do something drastic like cutting out carbohydrates,” says Dr. Eisenstein. “Most of the population can’t eat any processed carbohydrates [like white bread, white rice and pasta] because it causes them to become diabetic.” A better diet consists of vegetables, fruit and protein.

Of course, losing weight alone does not mean you’ll never develop the disease again. “It’s not a permanent cure if, as the patient gets older and regains the weight, they will get it again,” says Dr. Miranda. “The patient needs to maintain a healthy weight and keep track of it constantly.”