Farrah’s Stand Up to Cancer & Legacy

Gone but still giving, Farrah Fawcett lives on through  the efforts of her dear friend Alana Stewart and the foundation bearing her name. Their mission: Stand up  to cancer. The driving force: Hope

From the moment Alana Stewart’s best friend, Farrah  Fawcett, got her devastating diagnosis of anal cancer in 2006, she did what any near and dear one would do:  Stewart never left her side. But when Fawcett’s  heroic struggle came to an end  with her untimely death in June 2009, Stewart’s  journey was  only beginning. Not only  did she help Fawcett create the inspiring, Emmy nominated  documentary, Farrah’s Story, which Stewart filmed  herself during Fawcett’s three-  year illness, but she  also  became a torch-carrier. Within a year of  Fawcett’s  death, she brought to fruition her friend’s  unrealized dream. Stewart  officially opened the Farrah Fawcett Foundation. It is something that  Farrah created right after she was diagnosed with cancer in 2007.

The  foundation not only funds cutting-edge research but raises awareness for this type of cancer—one that is often only referenced in hushed  tones. “She had such courage, determination, and strength during this whole time, and yet she was always concerned about other people,” says  Stewart, who is now the foundation’s president and driving force. “We talked a lot about the foundation. She really believed she was going to be  here to run it and I wish she was, but I feel I am helping to carry on her wishes  and her legacy.” Since its inception, the Farrah Fawcett Foundation has been instrumental in raising awareness about this hard-to broach topic, not to mention establishing several patient-assistance funds for those struggling to pay for treatment. But it would be a meeting of minds with Stewart’s friend—actress, film  studio executive, and former CEO of Paramount Pictures, Sherry Lansing, one of the founding members of Stand Up to Cancer (SU2C)—that would catapult the foundation into the spotlight. It helped fund a research team to study the virus often responsible for not only anal cancer, but other types of preventable cancers that often go unchecked: HPV, or human papillomavirus.

It is estimated that more than 30,000 HPV-associated cancers occur in the United States alone each year. Its risk factors include having many sexual partners, being over 50 years in age, having a weakened immune system, and smoking. The SU2C Farrah Fawcett Foundation research team under the leadership of Ellis L. Reinherz, M.D., co-director of the Cancer Vaccine Center at the Dana-Farber Cancer Institute in Boston, Massachusetts, and Robert I. Haddad, M.D., chief of the head and neck oncology program at the Dana-Farber Cancer Institute, are already at work trying to change that number. Even Fawcett’s own oncologist, Lawrence D. Piro, M.D., co-chaired the committee reviewing all the initial proposals. The team plans to develop new vaccines and other immunotherapeutic approaches that stimulate cancer-killing immunity as treatments for patients with HPV-associated cancers including cancers of the anus, cervix, head, and neck. While Fawcett was not diagnosed with HPV, Stewart says, the more the foundation learned about the cancer, the more they realized that HPV was more often than not a traceable culprit for others suffering from the same cancer, at a rate of 90 percent. “She could have been one of those 5 or 10 percent who did not have [HPV], but since so much of anal cancer, and so many other cancers, are caused by HPV, SU2C and we decided to integrate that and make it a bigger research project.”

According to the CDC, 79 million people are infected with HPV and 14 million are newly infected each year. While we’re starting to see a decrease in overall incidence rates of many cancers, research has shown that HPV-related cancers are on the rise. It is extremely easy to catch HPV as it is a sexually transmitted virus that the majority of people in the United States will be exposed to in their lifetime. Although there is an HPV vaccine that is safe and effective, the vaccine rates for all three shots in the U.S. are among the lowest. In 2013, only 37 percent of girls were vaccinated while only 14 percent of boys received it— and the rate for girls is stagnating. This is an epidemic that the SU2C-Farrah Fawcett Foundation feel they can end.

The SU2CFarrah Fawcett Foundation Human Papillomavirus (HPV) Translational Research Team Grant will provide $1.2 million in funding over three years, and will focus on patients with HPVdriven cancers who relapse following initial therapy, and for whom few therapeutic options are available. “It is a very focused grant. We have given them three years with specific milestones they have to hit every six months,” says PamelaWilliams, who is on SU2C’s Council of Founders and Advisors. “The doctors have to tell our scientific advisors where they are at each stage.” The sudden focus on anal cancers and push for cutting-edge research should be credited to the foresight and bravery of Fawcett during those excruciating days when the pain was too much to bear. She knew instinctively that the documentary she tasked Stewart to film could initiate necessary dialogue and collaboration among others. This is exactly what has happened between her namesake foundation and that of SU2C in the intervening time. “I started watching the documentary the same time my partner, [late movie producer] Laura Ziskin, was going through cancer. The courage Farrah had to open it up for all of us to see was amazing. I appreciated it on such a profound level, going through privately what she did publicly,” says Williams. No matter how invasive it looked from the other side of the lens, Farrah pushed Stewart to keep filming.

During the last stages of her cancer, Farrah started to lose her most prized brand: her hair. Despite her naked courage in the face of such difficult and little-discussed cancer diagnosis, this was intensely difficult for the blonde “Angel.” She was not sure if she wanted to be seen on camera without her trademark golden mane. “Finally, we did it,” says Stewart, a former model and actress who understood all too well the brutal realities that women face in front of the public eye. “I remember Dr. [Lawrence] Piro saying, ‘You know what you have done for women, Farrah? So many women are so traumatized by losing their hair, and now one of the most famous woman in the world with the most famous head of hair in the world has lost her famous head of hair and she’s showing it to the world—you don’t know what you are doing for cancer patients out there.’” That was not the only stumbling block Fawcett managed to transcend. 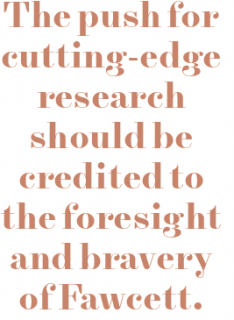 to receive thousands of letters from people who had read her story. “I remember a letter she got from a woman saying, ‘I was embarrassed to tell anyone I had anal cancer because there’s such a stigma attached to it. Now that Farrah Fawcett has come out and said it, I say that I got the kind of cancer Farrah has,’” recalls Stewart. She also remembers how one of the most inspiring gifts her friend gave to her was, perhaps, the driving force behind the foundation: Hope. “She never lost hope even when she was so ill that she had to go back to Germany for advanced procedures,” says Stewart. Or when the doctors felt the treatments were too much for Fawcett to bear, or when the press were overstepping their boundaries. “Each time she would fight back.” When her hospital records were leaked to the press, Fawcett set into motion the patient privacy rights bill that would prevent future records being exposed. “She was one of the smartest women I have ever met,” says Stewart. “She could look over a contract better than any attorney and find everything in it that needed correcting or changing.

She also had a great sense of humor.” Stewart recalls the one time in Germany when Fawcett was undergoing this particularly painful procedure that made her violently ill and the only person on staff was a lone, non-English speaking nurse who used dramatic, exaggerated hand movements to attempt to communicate with her patient. “She went out of the room at one point and Farrah lifted her head up from the bed and said, ‘God, they have sent me a loon!’ We could not stop laughing,” says Stewart. But it is her voice through the foundation’s partnership with SU2C that is on track to make an impact bigger than her pin-uppast. And the journey Stewart took with her friend was one that impacted her life in ways she could never have predicted. She knows that the partnership with SU2C is what Fawcett would have wanted her to do—but she also misses the friend who walked beside her in life for over 30 years. “I think Farrah would say live every day of your life and be grateful for it,” Stewart says. “Enjoy it because your life can change on a dime. Hers did.”

Gifts for the Beauty Queen